Today is the start of NaNoWriMo (National Novel Writing Month). It has become very popular over the years and the minimum goal you can set is to write fifty thousand words in a new novel over the thirty days of November. I have only 'successfully' done this twice in my writing career. As I have stated numerous times, I am a slow writer and thirty days is WAY too short for this type of writing sprint.

Having said that, I am giving it a whirl again. My writing speed has increased this past year, so I hope to make the finish line with a new plot bunny and have chosen this venue to announce it: 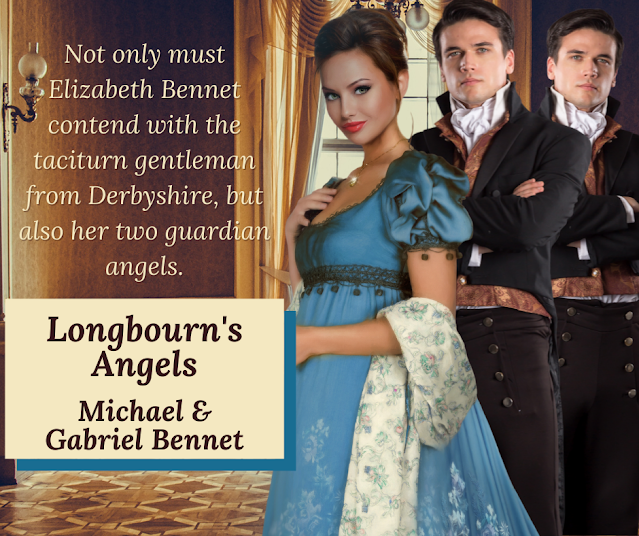 All I have, at this moment, is a small premise. This month will be spent creating a story readers will enjoy and want to revisit when they need a smile. To whet your whistle, I will give you a small taste of what is written so far.

All of Meryton waited with bated breath as the party from Netherfield Park entered the assembly room. Elizabeth, dancing with Samuel Watson missed the initial introductions given by Sir William Lucas as the evening’s master of ceremonies. She wasn’t worried about that fact. Being introduced at a ball was not difficult and she knew she would, at some time during the evening, make their acquaintance.

As she and Mr. Watson waited to go down the line, she noticed Mr. Bingley was good looking and gentlemanlike with a pleasant countenance and easy, unaffected manners. His sisters carried themselves with an air of decided fashion, although Elizabeth felt they were quite overdressed for a simple country assembly. The older man, whom she learned later was his brother-in-law, looked the gentleman but his fastidious attendance to the hidden flask in a coat pocket soon put paid to that observation. However, it was the third gentleman in the group who drew her attention with his fine, tall person, handsome features, and noble mien.

Elizabeth herself felt a faint fluttering of excitement when she laid eyes on the handsome man, and was extremely glad she had worn one of her newer gowns and taken extra care with her toilette that evening. Normally their maid pulled her hair back into a soft chignon as her hair was so hard to tame, but this evening she had managed to pin Lizzy’s riotous curls into some semblance of order, securing them in place with various pins and decorative flowers. Although her eldest sister Jane was the beauty of the family, Lizzy felt that for once she could stand with her head held high, knowing that she looked her very best.

It wasn’t long before Mr. Bingley asked Charlotte Lucas to dance and he joined the set. From where she danced, Lizzy could plainly see that Mama was not at all pleased over this turn of events, but her glare turned to smiles when the affable young man solicited Jane’s hand for the next two sets.

As pleasant and friendly Mr. Bingley was upon first acquaintance, his friend did not enjoy the same praise and good thoughts from the citizens of Meryton. He danced only with the ladies of his party and spent the rest of the evening stalking about the edges of the room, ignoring anyone who dared attempted polite conversation with him and refused all introductions to other patrons of the assembly. Lizzy, at one time, had hoped he would ask her to dance, but when she saw the hurt expression on Mrs. Long’s face when he turned his back and cut her direct, all good feelings evaporated like a fine mist when the sun rose. She determined right then and there; he was no gentleman.

Later in the evening, obliged by the scarcity of gentlemen to sit down for two dances, Elizabeth became aware that the proud Mr. Darcy had paused in front of her. Mr. Bingley, dancing with Jane, broke from the line to implore his friend to join the set. She had no intention of listening to their conversation, but as they were only a few feet away, it was impossible to avoid.

“Come, Darcy,” Bingley said, “I must have you dance. I hate to see you standing about by yourself in this stupid manner.”

“I certainly shall not. You know how I detest dancing, unless I am particularly acquainted with my partner. At such an assembly as this, it would be insupportable. Besides, your sisters are engaged and there is not another woman in the room whom it would not be a punishment to me to stand up with.”

“You are so frustratingly fastidious,” cried Bingley. “These people are my neighbors. Can you not, for my sake, lower yourself for one dance? Truly Darcy, I never met with so many pleasant girls in my life, as I have this evening; and several of them are uncommonly pretty.”

“You are dancing with the only handsome girl in the room,” said Mr. Darcy, looking toward the dance floor. Elizabeth took note of where he directed his attention and felt a slight thaw in her feelings. Someone who thought Jane beautiful could not be all that bad.

“Oh! she is the most beautiful creature I ever beheld! Regardless, you will not detract me from my mission. I must have you dance.” Bingley cast his gaze around and it fell on Elizabeth, who looked away, embarrassed at having almost been caught listening in on their conversation. “I say, Darcy, there is a young lady sitting down just behind you who is quite pretty. Miss Bennet will know who she is. Do let me ask my partner to introduce you.”

“Which do you mean?” and turning round, Darcy looked for a moment at Elizabeth, till catching her eye, he withdrew his own and coldly said, “She is tolerable; but not handsome enough to tempt me. I am in no humor at present to give consequence to young ladies who are slighted by other men. Return to your partner and enjoy her smiles, you are wasting your time with me.”

Stunned, Elizabeth could not even form words in her mind at his brutal observation. All her life she had been found wanting by their mother, forever compared to Jane who was the epitome of beauty and grace, yet she’d always felt she had a small measure of pleasing features. Her eyes were quite fine and she had a quick smile for everyone. To be dismissed so summarily by someone who had never met her before this evening, cut her to the quick. Mr. Bingley opened his mouth to argue further when a tall, familiar figure stepped in front of both gentlemen.

“Excuse me, sir. I believe you owe my sister an apology.”

“I do not know who your sister is, sir,” Darcy replied, giving the younger man a haughty glare.

“She is the one whom you find barely tolerable and not handsome enough to dance with.”

Oh dear, this could get messy.

Elizabeth hurried to join the men. By this time, a second gentleman had come alongside and also glared at Mr. Darcy.

“If you require introductions, join us outside. My brother and I will introduce you to our fists. You will find they are not tolerable as well.”

“Gabriel! Michael!” Elizabeth stepped in their midst and faced them. “Apologize to Mr. Darcy at once.”

“He insulted you, Elizabeth,” Gabriel ground out between clenched teeth, his steely gaze never wavering from Mr. Darcy.

“He deserves to be horsewhipped for saying such things about a lady to whom he has not been introduced,” Michael added.

“Introduced or not, no gentleman would say that about a lady. It was extremely rude.” Gabriel said and tried gently to move Elizabeth aside.

“I agree, Gabriel. Would you like to take the first punch?”

“No, you are the elder Michael, you may go first.”

“Boys!” Elizabeth shook off Gabriel’s hand, stood her ground and stared her brothers down. “There will be no punches thrown, nor whippings given, and you will apologize to Mr. Darcy.”

“No need, Miss Elizabeth. I will apologize.”

She glanced over her shoulder toward Mr. Darcy. “We have not been introduced, sir. You will not address me until you are. I am of a mind to let my brothers have at you.”

“You are the Bennet triplets!” At Mr. Bingley’s astonished outburst, Elizabeth cut a quick glance at the young man who stood open mouthed, completely forgetting his dance with Jane. “You were a year behind me at Cambridge and much talked about, if I recall.”

“As were you,” Michael Bennet said. He then assessed Mr. Darcy. He looked at him from head to toe and then back up to stare him directly in the face. “Because we are Cambridge men, I know you have a younger sister,” – Mr. Darcy gave a violent start – “and would like to pose a hypothetical question. If someone so wholly unconnected with your sister said, within her hearing, that she was not handsome enough to dance with, what would you do?”

“I would be tempted to call them out onto the field of honor.” Mr. Darcy turned his somber gaze to Lizzy and gave her a polite half bow. “Although we have not been properly introduced, please allow me to apologize Miss Elizabeth for the insult I levied in your direction. It was not well done and I am heartily ashamed of my words.”

She longed to turn and leave without acknowledging his apology, but she was raised a gentlewoman and would behave as one.

“Apology accepted, sir.” She gave him an equally polite curtsy, then without so much as a by your leave, grabbed an arm of each of her brothers and dragged them to the other side of the room.

“Promise me you will not fight. The next set is starting and Jonathan Lucas awaits me at the refreshment table.”

“We promise,” the brothers said in unison and she could only hope they would keep that promise. She made a mental note to follow up with more directives when they got home. Her brothers were too clever by far and just because they promised not to fight at the assembly did not mean they would not exact vengeance on the man in the following days or weeks.

The Bennet brothers were known to be overprotective of their sister, Elizabeth as well as Jane. Mrs. Bennet bemoaned their actions, saying no eligible young man would ever darken the door to Longbourn for fear of facing the wrath of Michael and Gabriel, Longbourn’s resident guardian angels. With any luck, Mr. Darcy would be gone from the area after a short visit with his friend.