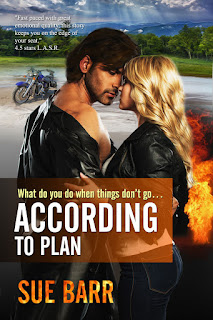 This past weekend I visited a few blogs involved with Weekend Writing Warriors and a few of them are writing snappy mysteries involving feisty female P.I.'s, and it had me thinking of the very first book I ever sold to a publisher. Because I'm wallowing in nostalgia, I thought I'd share one scene.

To set the scene:

Shelby Stewart - a small-time private investigator, determined to make it on her own without any help from...

Tank - aka, Jake Steele, ex-husband, and former business partner. His main goal is to win back the heart of Shelby and he'll get some help from...

Polly - Shelby's best friend as well as her very bored receptionist. She is firmly in the corner that Shelby and Tank should get back together.

He pushed off the desk and moved around to stand in front of me. By sitting at my desk, I’d boxed myself in. That Tank was aware of this was evident by the hint of a smile touching the corner of his lips. Testosterone and male awareness poured off him and my heart suddenly began pounding in my throat and I closed my eyes. He drew close enough that I caught his scent.

I could feel the warmth of his breath, brushing my temple and had a death grip on the arms of the chair. This time I’d stay in control. No good-looking, drop-dead, gorgeous man would turn me into a wilting female. No way, not this time. I... Warm lips covered mine.

Blank. My mind went blank when he began nibbling on my lower lip. He was such a good kisser. Wanting more I leaned forward, lips parting in anticipation. My eyes flew open when he broke off the kiss. With his face mere inches from mine and his eyes twinkling with humor, I knew I’d been had.

“See you later, darlin’.” He straightened and swaggered out, looking like he kissed girls senseless all the time. Bemused, I watched him walk away. His jeans, low on his hips, the material faded and worn, caressed him like an old friend. He really did fill those Levis out nicely. Oh crap! I forgot to tell him where he could stay.

“Guest bedroom only,” I called after him. “Tank?”

The front door slammed. Why did my noodle go on vacation whenever he was around? Heavy sighing could be heard in the next room. Polly was drooling over Tank again.

“Pull it back in, Polly. I can hear dripping from here.”

She sighed out, “Oh god, he’s the most gorgeous man ever!” I pictured her with her chin resting on her palm, all gooey and dreamy-eyed, watching him get on his motorcycle. “I don’t know why you won’t take him back, honey. If he was mine, I’d be in his front pocket all day.”

Yeah, well, those days were over. I grabbed the keys to my car. I should have about an hour head start on him. By the time he got to my place, dropped off his stuff, and made it out to the Grant’s, I’d be long gone.

I loved it when a plan worked.

What do you do when things don’t go According to Plan? For starters, you trick, deceive and lie to the very person who ruined your best-laid plans.

Welcome to the world of Shelby Stewart, P.I., who’s been hired to find socialite, Harrison Grant. To complicate matters further her ex-husband, Tank shows up looking for Harrison as well, albeit for a very different reason. Harry is the prime suspect in the grisly murder of a call girl in L.A.

That wouldn’t be so bad, but Tank plans on staying at Shelby’s house and makes it obvious he’s quite willing to help her heat the sheets, again. Shelby knows that sex with Tank is dangerous, fast, and sometimes a little dirty. Now is not the time to become side-tracked.

Frustration becomes Shelby’s newest partner as she makes plans to out maneuver Tank in their parallel quest. Tank, on the other hand, is always one step ahead of the game—and is not what, or who Shelby thought.

He broke her heart once before. This time she’ll harden her heart. This time his sweet, slow kisses won’t take her knees out from under her. This time she won’t tumble into bed with him. This time it will all work out ~ According to Plan.