The ink had barely dried on Pride & Perception when the muse struck with another delicious plot bunny. I keep all my bunnies safely penned in my OneNote, but this little beggar escaped and... I'm 35K into the story.

Unwitting Compromise centers around... well... a compromise. It occurs early in the story wherein Elizabeth, quite fatigued after caring for Jane, finds she cannot fall asleep. She thinks if she grabs a boring book from the library, she'll nod off in no time. Unfortunately, she falls asleep on one of the couches, and at first, thought she was having a vivid dream, but when the dream - ahem - forges a pathway into untried territory - she awakens.

Of course, there are consequences, and Mr. Darcy denies it all when confronted. In his defense, he was very drunk and has no recollection. Left on her own, Elizabeth and her father, with the aid of extended family members, find a gentleman who will marry Lizzy and claim the child as his own.

This vignette is the scene where Lizzy meets Mr. Talbot. 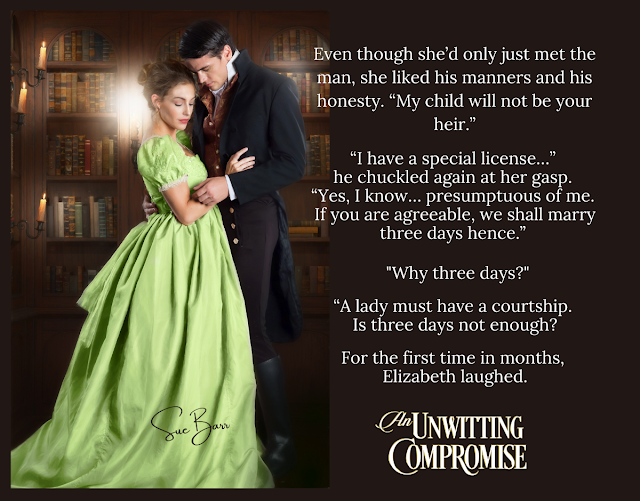 The next day, Papa returned to Longbourn saying that he’d given permission to Uncle Gardiner to negotiate any marriage offers in his stead. The following week, her uncle asked her to come to the study. She entered to discover a stranger seated by the fireplace. He stood immediately upon her arrival and she noted his height and athletic build. Although older than Papa, he was handsome and had a ready smile.

“Elizabeth, I would like to introduce you to Mr. Henry Talbot.”

The man’s voice had a pleasant rumble to it and soothed her frayed nerves. She gave him a curtsy and he nodded back in acknowledgment.

“Mr. Talbot is a friend of your cousin, the Marquess.”

“Oh!” Her eyes widened. Was he a titled gentleman? She mentally shook her head. No, Uncle Gardiner had introduced him as Mr. Talbot. “I’m pleased to make your acquaintance.”

“Mr. Gardiner. May I be so bold as to ask your niece if she would accompany me to the little park at the end of your street?”

“I… ah… yes. Of course. Her sister Jane can accompany you.”

“No, I would rather a footman, please. Our conversation will be a private one, which she can share with her sister when we return.”

Uncle called for a footman and soon Elizabeth was walking the paths of the park. Mr. Talbot said not a word until they reached a bench and he asked if she’d take a seat. The footman stayed a few yards away at a respectful distance. Not too close to hear the conversation, but close enough for propriety. She almost laughed out loud at the thought.

“Miss Elizabeth, I am aware you may be enceinte. Maybe about six weeks. Is that correct?”

She blushed and lowered her eyes. “Yes.”

She gave a start when his finger touched the bottom of her chin and raised her face.

“No shame, Miss Elizabeth. I am aware of the circumstances surrounding your condition and will not allow you to bow your head because of it.” He smiled at her look of confusion. “If we rub along nicely, I expect you to hold your head high and look people in the eyes. I will claim your child as my own, and male or female, they will inherit all that I have.”

“Why?” she finally whispered.

“I am unable to have children. My wife, who passed away about ten years ago, thought the fault lay with her, but I have had a few paramours in my time and they have never fallen with child.” He chuckled at her blush. “I am no innocent boy, Miss Elizabeth. I’ve seen over fifty summers and will not paint myself as a saint.”

“I cannot judge your actions, sir. I do not even know you.”

“No, you do not, but I would like to change all that.” He took one of her gloved hands in his. “My doctors have informed me I have only a few short years before I leave this mortal shell. I have no heirs and no other family. All my properties will go to waste and my family’s heritage will become nothing but words written on aging parchment.”

“I am sorry to hear that.” Even though she’d only just met the man, she liked his manners and his honesty. “But my child will not be your heir.”

“I have a special license…” he chuckled again at her gasp. “Yes, I know… presumptuous of me. If you are agreeable, we shall marry three days hence. You are not far enough along to show and I abhor Town, so no one will be surprised if I tuck you away in the countryside. Upon my death, all that I have will go to you and our child.” He stressed the word ‘our.’ “The entail on my estate and title – yes, I do have a title – are in fee simple and once our child is born, I will change my will to add their name and no one will ever contest it.”

“A lady must have a courtship. Are three days not enough?”

For the first time in months, Elizabeth laughed.

“Sir, a half-hour was enough.”

“Have you no desire to know what title I have?”

“No,” she shook her head. “I’ve never been one to hold the peerage in awe. They serve a purpose and unless you have a title where my son – if the child is male – must take a seat in the House of Lords, I can stay in the country and rusticate to my heart’s content.”

“Our son will have a seat in the House of Lords when the time comes. Do you still wish to move forward?”

She paused. If he had a seat in the House of Lords, his title was most likely Earl or higher. Could she do this? Her thoughts flew to Jane and then the rest of her sisters. Their chances of marrying well increased with this connection. For the sake of her child and her unwed sisters, she would accept Mr. Talbot’s proposal.

“Well, then.” He moved off the bench, went down on one knee, and pulled a small ring from his coat pocket. Taking her hand in his, he slid the ring up to the first knuckle on her finger while saying, “Miss Elizabeth Bennet of Longbourn, would you marry me?”

“Buckinghamshire,” he supplied the answer to her unspoken question.

“Mr. Talbot of Buckinghamshire, I will marry you.”

Upon her acceptance, he slid the ring all the way down her finger and then pulled her to her feet. Before she could even think or breathe, he kissed her lightly on the lips. Her eyes widened and she sucked in her breath.

“Fear not, Miss Elizabeth. I am not a libertine and will not exercise my husbandly rights. Not right away. I will wait until you are ready and only then, will I come to your bed.”

Her cheeks heated and she knew she’d blushed deeply.

“Let us get to know one another, shall we?” He turned and tucked her arm in his and continued their walk through the park. “Ask me anything you like.”

P.S.: Although Elizabeth finds refuge with another dynamic man at the beginning of this story, there IS a HEA for our treasured couple - honest.