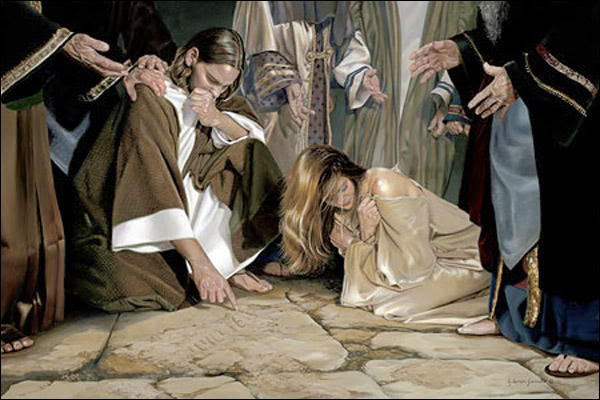 And the scribes and the Pharisees led a woman who was taken in adultery and standing her in their midst saying to Him, "Teacher, this woman was caught in the act of adultery: and in the Torah of Moses it is commanded for us to stone such as those. Therefore what do You Yourself say?" And they were saying this testing Him, so they could accuse Him. But Y'shua, bending down, wrote with His finger in the dirt. And as they were continuing to ask Him, He straightened up and said to them, "The one of you who is without sin must cast the first stone." Then bending down again, He wrote in the dirt. And those listening were leaving one by one, beginning with the elders. Then only He and the woman in the middle were left. And straightening up Y'shua said to her, "Woman, where are they? Does no one accuse you?" And she said, "No one Lord." Then Y'shua said, "Neither do I condemn you. Go, from now on you must no longer sin."

This is a beautiful parable of not only the woman who sinned, but of us. Each of us has sinned and the devil loves nothing better than to throw our past mistakes in our face and taunt us that we deserve to die. But Christ writes in the sand and the devil has to flee. Do you want to know what He would write in the sand for us?

Christ died on the cross so that if we believe on Him, our sins are forgiven, never to be remembered. Never let anyone tell you that you are a worthless person, for you are so precious that even if you were the only person on this planet - Christ would still take on all your sin so that you can stand before God forgiven. How awesome is that?
Email ThisBlogThis!Share to TwitterShare to FacebookShare to Pinterest
Labels: #Devotional, God's Love, This & That