I'm baaaack! One of the rabbit holes I disappeared into these past few weeks was Discord, more specifically, MidJourney - an Artificial Intelligence (AI) program. I wanted to create my own characters for Longbourn's Angels that I could use for marketing and teasers. Below is my 'cast' for my WIP (work in progress), Longbourn's Angels. Crossing fingers, toes and eyes it will be ready for release early 2023.

I also created some fun graphics and the one I am using today pairs nicely with the snippet I wish to share. 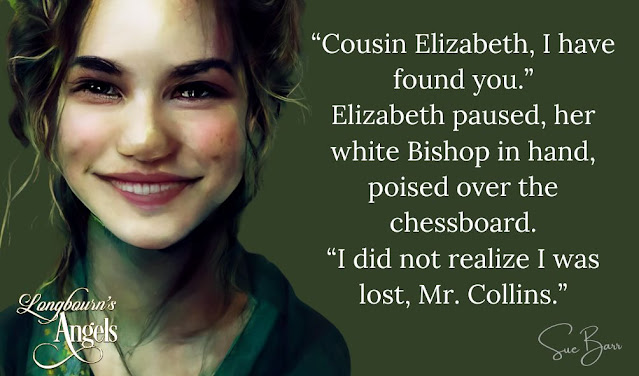 If there had not been a ball to prepare for and talk of, Mrs. Bennet would have been in a pitiable state. Ever since the invitation to the ball had been extended, the skies had opened and a deluge of rain fell for five straight days. As such, she was prevented from taking the carriage to Meryton to obtain whatever she deemed necessary for Jane’s dress. She also fretted over Lydia’s gown, as this would be her first official ball, having been granted permission to attend and dance with family members only. Papa would return Lydia back to Longbourn after the supper hour.

Mrs. Bennet’s frustration was felt in equal parts by all the Mister Bennets, who would rather have been anywhere but inside the house. In order to escape animated conversations about ribbons, lace, length of sleeves, and lack of shoe roses, they took refuge in their father’s well-stocked library to read or play chess, with Elizabeth frequently joining them in a bid to escape their persistent cousin.

It was there he finally tracked her down.

“Cousin Elizabeth, I have found you.”

Elizabeth paused, her white bishop in hand, poised over the chessboard.

Now, for the rest:

“I did not realize I was lost, Mr. Collins.”

“You are uniformly delightful.”

“What did you need to see Lizzy about, Mr. Collins?” Papa queried from his comfortable chair by the fireplace. He knew of her frustration, and had found it amusing – for the first few days – but now, even the edges of his temper were beginning to fray.

“I sought out my cousin’s company in order to request her company for the first two sets at Mr. Bingley’s ball.”

Elizabeth flashed a look of panic toward Gabriel, seated across from her at the chess table. Without even looking in the direction of their cousin, Gabe said, “Lizzy’s first set of dances has already been spoken for.”

“Excuse me, Gabe. I need to put your King in check before I address Mr. Collins.” Elizabeth dropped the chess piece onto the board, feeling a surge of satisfaction at her brother’s incredulous look. She then stood to face her cousin. “I am not required to divulge this information to anyone save my father, Mr. Collins. Suffice to say, it is none of your business, and you will see for yourself on the night of the ball.”

She fervently hoped one of her brothers or Papa would stand up with her because, as of this exact moment, she did not have a partner for the opening sets.

“This is not to be borne,” Mr. Collins sputtered. “You will mind your sharp tongue in the future, Cousin Elizabeth.”

The silence which descended upon the room was almost measurable. Papa carefully placed a bookmark in his book, set it on the side table, and rose to his feet. He was at Mr. Collins’s side in two strides, causing the younger man to crane his neck in order to meet his elder cousin’s gaze.

“What is not to be borne?” Papa asked, his voice deceptively soft. “Who are you to tell my daughter to mind her tongue?”

“I have determined Cousin Elizabeth suits me best. She is next in age and beauty to Cousin Jane and, as her future husband, I naturally assumed she would open and close the ball with me.”

Elizabeth dropped back into her chair, shocked at the audacity of the man. His outlandish explanation fully explained why he had dogged her every step these past few days.

“Elizabeth,” Papa said without turning around, “would you care to join your mother and sisters? Your brothers and I need to have a conversation with Mr. Collins.”

“I respectfully request to stay, Father. I believe you are going to speak about me, and wish to be present.”

Papa cut her a quick glance and winked. She did her very best not to smile when Mr. Collins’s mouth flopped open in surprise. As it was, she clearly heard Gabe cut short a gurgle of laughter. She dared not look in Michael’s direction. He took his sister’s safety and wellbeing to heart and, like his namesake, truly became an avenging angel if anyone threatened his Lizzy.

“Very well.” Papa turned back to Mr. Collins. “First, let us talk about the ball. Did you ask Jane for the first set, as she is the eldest?”

“I did not. Mrs. Bennet told me she was as good as engaged. I assume her betrothed will open the ball with her.”

“Jane is engaged? I shall have to congratulate her, as this is the first I heard of it.” A deep frown creased the forehead of Mr. Collins. Elizabeth wasn’t sure if it was because he had a hard time understanding Papa’s caustic humor, or if he now just realized Jane was not spoken for. “Well then, let us address why you believe you are betrothed to Elizabeth.”

Papa returned to his chair while Mr. Collins swallowed hard, and began to speak.

“On my first night here, I spoke to Mrs. Bennet of my desire to extend an olive branch, more specifically of finding my future wife while in Hertfordshire.” He paused when Michael coughed. “I commented on the beauty of all my cousins, most especially Cousin Jane.”

Michael’s cough turned into what sounded like a growl. Mr. Collins began to get a panicked look about him.

“Excuse my son. He has the first stages of a cold and needs to clear his throat often. Carry on. I am fascinated with what you are telling me.”

“As I said, before being rudely interrupted,” Mr. Collins dared to glare in Michael’s direction. “I mentioned my preference toward Cousin Jane, and Mrs. Bennet said she felt it was incumbent upon her to tell me your eldest daughter was very close to becoming engaged. Upon seeing my disappointment, she told me not to give up hope. I am certain, said she, there are other young ladies who would look upon your situation with a hopeful eye. I asked if her other daughters had an understanding with any gentleman, to which she said no. I then knew I had your wife’s blessing and was assured of my success in gaining your second daughter’s hand in marriage.”

“We have two things which must be addressed, Mr. Collins. The first is your desire to extend an olive branch by way of marrying one of my daughters.” Papa held up his hand when Mr. Collins opened his mouth to speak again. “I realize your father and I had an acrimonious relationship, and cannot fault you for wishing to heal the breach in our family. I do, however, take umbrage with the notion you believe you have an understanding with my daughter, especially when I explicitly informed you – upon your arrival – not to seek a wife from amongst my daughters.”

“But if I take Cousin Elizabeth to wife, when you leave this mortal coil, your family will have the comfort of knowing one of their own inherits Longbourn. That is, if we are so blessed as to have a son.”

The room fell silent, broken only by the snap and crackle of the fireplace.

“Mr. Collins, are you deficient in understanding?”

“Do you not see my sons in this room with me?”

“And whom do you think will inherit Longbourn when I die?”

“And if anything happened to my eldest son, whom do you think will inherit? That is, if Michael has not married and had a son of his own?”

“So, it is safe to say, one of my own will inherit Longbourn.”

“Cousin Bennet.” Mr. Collins began to wring his hands. “Should the Good Lord take you and your sons, I would step in and become head of the family. The entail was designed for this very thing.”

“I am of a mind to have our local physician check you over. Your memory is exceedingly faulty for one so young. When you first arrived, not only did I warn you against pursuing my daughters, but I also told you the entail was broken when my eldest son reached his majority. I cannot be held responsible if your father did not inform you of this fact.” Mr. Collins stood mute by the door. “Now that the line of succession has been confirmed, let us address the fact you had the audacity to describe yourself as the future husband of Elizabeth.”

“As I said before, Cousin Bennet—”

“You are not, never have been, and never will be, the future husband of Elizabeth.”

“I do not understand. I believe Mrs. Bennet wholeheartedly supports this decision.”

“But, I do not, and as Elizabeth has not yet reached her majority, I would not give consent, nor my blessing to such a union.”

Thankful for her father’s staunch support, Elizabeth stood and faced their cousin.

“Mr. Collins, while I thank you for the honor you wished to bestow on me, it has become a moot point. I would never have said yes to your proposal of marriage.”

“Never. I do not love you, sir, and will only marry a man who can hold my heart in tender care.” Mr. Collins continued to stare, his mouth hanging open. She did not wish to cause him further embarrassment unless provoked, so she turned her attention to her father. “I believe I will join my sisters.”

“Are you forfeiting the game, Lizzy?” Gabe called out, his voice hopeful.

With a sly grin, she leaned over the chess table and said, “There is only one move open, dear brother, and then you are in checkmate.”

Gabe studied the board and grimaced before tipping his king. Elizabeth straightened and moved toward the door. When Mr. Collins stepped aside, allowing her to exit gracefully, she bobbed him a quick curtsy. No need to be rude to the poor man. She was glad she had afforded him the small courtesy because, before the door closed behind her, she heard Papa say, “Take a seat, Mr. Collins. We are not done here.”

Weekend Writing Warriors is a fun blog hop where authors share eight to ten lines from a Work in Progress. If you'd like to check out some of the other author's writing, please click on this link: WeWriWa