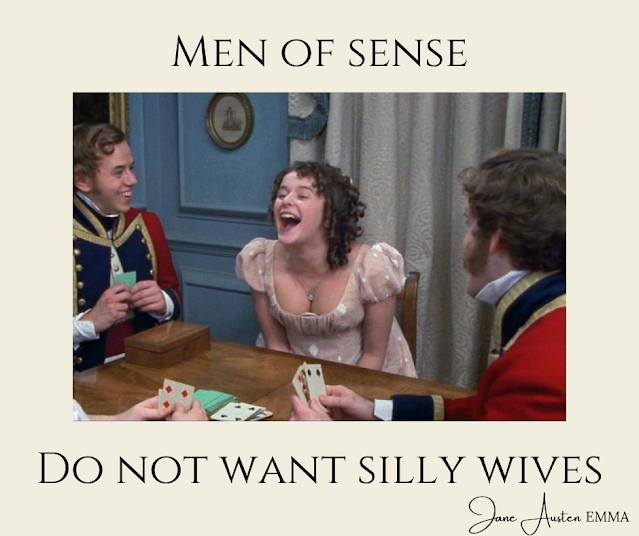 I know Miss Lydia is from Pride & Prejudice, not Emma, but she is one of the main reasons Mr. Darcy has set his eye on Miss Elizabeth - her vulgar relations.

Now, onto today's excerpt from In Essentials:

Less than a week later, Darcy could scarce contain the smug satisfaction which threatened to crack his stoic façade. Fortune could not have smiled on him brighter, for only yesterday Miss Bingley had invited Miss Bennet to attend her and Louisa. He was not incognizant to the fact she issued the invitation for a time when the gentlemen of the house would not be available as they had previous plans to dine with Colonel Forster and the officers of the ____shire Militia.

Of that saliant fact, Mrs. Bennet must have been aware, because she sent her daughter to Netherfield on the back of a horse when it was apparent to anyone with a brain that a storm was brewing. Due to the mother’s obvious machinations, Jane Bennet had fallen ill whilst sipping her soup – according to a tittering Miss Bingley – having endured the last mile in driving rain. She now lay upstairs, suffering the effects of a severe cold. As much as he felt bad for the poor girl, whose only guilt was to follow her vulgar mother’s directions, the end result was beyond anything he could have imagined, for that very morning, as he and the others broke their fast, his sought-after prize was shown into the breakfast parlor. He could not have planned this better himself. He firmly believed that fortune favors the bold and he would make this circumstance work to his advantage.

He then almost chuckled outright at the reaction of Miss Bingley and her sister, Mrs. Hurst. Elizabeth’s sudden appearance created a great deal of surprise in the two ladies when their butler announced, “Miss Elizabeth Bennet.”

“Miss Eliza!” Miss Bingley had declared. “Did you walk all the way to Netherfield?”

“Why, that is over five miles!”

“Three, if you cut through fields.”

“Would you care for some tea, Miss Elizabeth?” Bingley offered, now that the shock of seeing his angel’s sister so early in the morning had worn off.

“No thank you, I came only for Jane. How is my sister?”

“Sadly, Miss Bennet slept ill and though she was awake when I last looked in on her, she was still very feverish and not well enough to leave her room,” Miss Bingley said and Darcy was surprised at the amount of concern in her voice. Caroline Bingley was not known for having any compassion for anyone, save herself. “I can take you to her now, if you so desire.”

“If it is no inconvenience, I would appreciate seeing her right away.”

Both ladies quit the room and Darcy resumed his seat, thinking how fresh Miss Elizabeth appeared, her cheeks aglow from the exercise, her eyes brightened by the exercise.

“Damn fine girl, that Miss Elizabeth,” Hurst muttered before stuffing another sausage into his mouth.

“What was that, Hurst?” Darcy asked, noting how Louisa Hurst gaped at her husband, for he rarely spoke.

“She is a damn fine girl to walk all that way just to enquire about her sister’s welfare.”

“Reginald,” Mrs. Hurst scolded. “You do not know what you are saying.”

Hurst twisted in his seat and speared his wife in place with a withering glare.

“Could you ever, in your lifetime, imagine your sister walking three miles across muddy fields to look after you?” When Mrs. Hurst only sniffed a response, he continued. “I thought not. You realize that young lady must have left the house over two hours ago to traverse the distance? That is a prime example of loyalty and it is hard won.”

He turned back to his breakfast and back to ignoring his wife who remained seated beside him with her lips pursed and a scowl marring her face.

Darcy would have loved nothing better than to keep his mind more agreeably engaged, meditating on the very great pleasure which a pair of fine eyes in the face of a pretty woman could bestow, but he had some unpleasant business to attend. For that reason, he excused himself and made his way to his suite of rooms to compose and post replies in response to not one, but two express posts received earlier that morning. One from his uncle the earl, the other from his aunt in Kent. Both offensive in nature.

His uncle had written:

What the deuce are you doing in Hertfordshire? You have offended not only me, but also the Earl Tewkesbury, whose daughter expected you to open the ball with her. I have assured him you are on the hunt for a wife and that his daughter will do nicely. I know her one tooth is a bit crooked, but if you close your eyes whilst in the marriage bed, she has sixty thousand other reasons for you to make her an offer.

I managed to soothe his ruffled feathers and promised him you would attend the theater next week. Do not fail me in this, Darcy. As the head of the Fitzwilliam family, I demand you make an advantageous marriage and Tewkesbury’s daughter fits the bill. He is a great ally in the House of Lords and I do not wish him for an enemy.

I expect you back in London before the week is out.

To which he replied:

Thank you for your kind concern over my marital felicity. You are quite correct in the fact that Earl Tewkesbury is not someone you wish for as an enemy. Therefore, you should offer to help him find some other hapless fool, as I will not be performing that service. You may be head of the Fitzwilliam family, but I am the head of the Darcy family. You hold no sway over my decisions with regard to Pemberley, or Georgiana. Also, I have more wealth than I know what to do with and a further sixty thousand pounds is not incentive enough to wed any woman, especially one whose tooth pushes out her lip. Tell her father to use some of her dowry to have a competent doctor remove it.

The other letter had been just as offensive. His lady aunt had written:

A report of an alarming nature has reached me that you are in the house of that abominable son of a tradesman – in Hertfordshire of all places. What are you thinking? How could you degrade yourself so thoroughly? Once you are married to Anne, you will cut all ties with that family. Will the shades of Rosings Park and Pemberley be thus polluted by their atrocious company? I think not.

I fully expect you to quit their sphere and make your way to Kent. I anticipate your company for the Yuletide season as a wedding on Christmas Eve suits Anne quite well. She will look lovely in red velvet and I will have her gown trimmed with white fur. My rector has been apprised that you will be arriving shortly and has the marriage license prepared. All that is required is your presence and signature. Because it is a common license, the banns do not have to be read.

I await your arrival,

To his aunt, he wrote:

As stated more times than I care to remember, I will not marry Anne. She can barely sit in a chair for a whole meal without sagging like a limp ribbon and has to be helped up and down the stairs. What makes you think she could remain upright for the length of a marriage ceremony, let alone survive the rigors that come with fully being a wife and possibly falling with child? It would be her death sentence and I refuse to do that to her. I hold her in high regard – as a cousin – and nothing more.

I demand you stop spreading the lie that an engagement you apparently brokered with my dear mother has been in existence since my cousin and I were in our cradles. Highly improbable, as I am four years older than Anne. My mother never once spoke of such an arrangement. My good father, before his untimely demise, also put in writing that any such demands about this were to be disregarded. No betrothal settlements have ever been authorized or signed by him, or myself.

Desist with these outrageous demands and have your parson tear up the license. I shall not arrive at Rosings until my scheduled time next Easter.

He affixed his seal to the letters and sent them regular post, forcing his officious relatives to stew a bit longer awaiting his response.