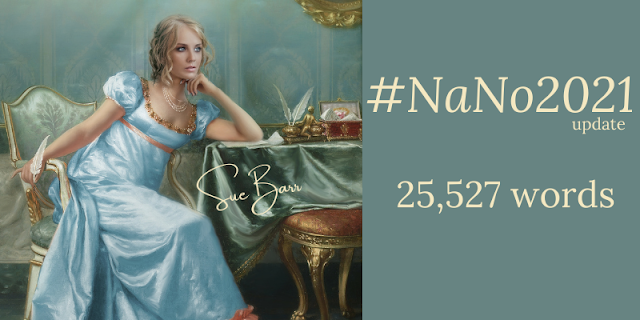 Two days from the finish line and I now know I will not reach my goal of fifty thousand words. The minute I had to wear my moisture gloves for more than a week, I knew this would happen. Though disappointed, I am glad I got some words down on the two WIPs which have been dancing through my head this past month. I even got in some writing yesterday despite the fact the whole family descended for my husband's birthday. After forty years I finally got to sing him that Beatles song - 'When I'm 64'

Today's excerpt continues with In Essentials. As always, this is a first draft (no editing) and as such could change greatly before publishing.

Once again, Elizabeth found her voice had deserted her. Beside her walked Mr. Darcy and she was grateful for her bonnet. As she came only to his shoulder, she knew the brim of her hat hid her face and the slew of blushes that refused to abate no matter how much she scolded her inner self.

“Come, Miss Elizabeth. We must have some conversation.”

Startled by his flirtatious tone, she glanced up to find those azure eyes perusing her face. Flustered, she looked straight ahead and marshaled her thoughts into some semblance of order.

“Pray, Mr. Darcy, what topic would you care to discuss?”

“I wish to know more about you. What is your preferred activity on beautiful sunny days such as this?”

Flattered by his willingness to learn more about her, she smiled and said, “When the weather holds, you can find me on the path to our highest point of land. We call it Oakham Mount. Compared to the craggy peaks of Derbyshire, you would consider it a mere bump in the land, but I do not care. The view from there, especially first thing in the morning is glorious.”

“I would be pleased to visit this famous hill. Every shire has its own unique beauty, although I must say I am quite prejudiced to my home, Pemberley, and the surrounding peaks of Derbyshire.”

“Is that the name of your estate? Pemberley?”

“Aye, it has been in our family since the Norman invasion.”

“Then your house must have many tales to tell, with all the history that has passed through and lived between the walls.”

“We have had a few rascals in our family, but for the most part my ancestors are honorable and proud.”

“What of yourself, Miss Elizabeth?”

“As I said, our family has lived within Longbourn village for six generations, although a Bennet has been on this land since the times of the Plantagenets. It was my great, great, great… oh, there are too many greats to count, but my great grandfather, many times removed, built the house we live in now.”

“Your estate is called Longbourn village?”

Elizabeth could not help herself, she laughed.

“I know we are only a mile from the market town of Meryton, but we have a thriving community of our own. We have our own chapel, butcher, and baker. A blacksmith and the apothecary took up residence in our little village over ten years ago. We only attend Meryton to visit the milliner and browse the book store.”

They walked in silence for a few minutes and she wondered if he was impressed with the longevity of her family line. The Bennets may not be wealthy in the physical sense but their roots grew deep in Hertfordshire soil. It was a shame her parents were unable to birth a son. With the estate entailed to a distant cousin, the last of the Bennets would be forced to leave the land they had lived on since the thirteenth century.

“Tell me of your family, Mr. Darcy,” she said to restart their conversation.

“There is not much to tell, my family is small compared to yours. Both my parents are gone, leaving only me and my younger sister.” He paused as she murmured her condolences. “My father’s brother lives fifty miles away. I am grateful he is so close.”

She was surprised at his view of the distance.

“Fifty miles! You think that as close?”

“What is fifty miles of good road?”

“London is only about twenty miles from our home and yet we see our aunt and uncle no more than once or twice a year.”

“I would presume, because we are so isolated in Derbyshire, that we make more of an effort to visit family and friends.”

“Jane and I have had the pleasure of staying at our uncle's house in London. My sister usually goes back to town with them after Christmas and returns home around Easter, and I attend them for a portion of the summer and early fall." They walked in silence for a bit, then she ventured to continue the conversation. "And of your mother’s side? Are you close with them?”

She felt his arm tense at her question and immediately felt remorse over her query.

“My mother’s maternal grandfather still lives, although he is well into his seventh decade. There is a good sprinkling of uncles and cousins from that family, however, they love their country estates and rarely come to town. Her brother lives in London and her sister resides in Kent.”

Not only did his arm stiffen further from her teasing remark but he came to a complete stop.

She shivered at the dark tone of his voice and dared to look up. His brow was furrowed, his eyebrows forming one dark slash above those compelling eyes.

“Nothing bad,” she hastened to assure him. “It is only that your family is not as small as you led me to believe. It seems I shall have to keep my eye on you, sir. What other secrets do you hide behind that charming smile?”

With gentle pressure on her arm, he encouraged her to begin walking again.

“I do have secrets, Miss Elizabeth, but I can tell you, with impunity, I abhor deceit of any kind and if I can lay bare the truth without hurting someone in the telling, I follow that route.”

“That is an admirable trait, although I understand there are times when it is wise to not blurt out the truth of every matter.”

“I am glad you hold this view on the matter.”

Mr. Darcy’s voice conveyed a sense of quiet, yet smug satisfaction. Because she did not know the man from Derbyshire very well, she shrugged it off, determined to enjoy the remainder of their walk.

A few days later, all the principal families gathered at Lucas Lodge for an evening’s entertainment of games and cards.

“Mr. Darcy continues to show marked attention to you.”

Elizabeth and her closest friend, Charlotte Lucas were huddled together waiting for the signal to start the first game, which she had been informed would be Consequence. The Netherfield party, as per usual, had shown up nearly a half-hour later than everyone else and while Mr. Bingley had trotted straight to Jane’s side, Mr. Darcy, Miss Bingley, along with Mr. and Mrs. Hurst stayed cloistered near the entrance.

“I assure you, he does not. When Mr. Bingley comes to Longbourn to see our fair Jane, Mama throws me into his company. I am tasked to keep him occupied while the two love birds become better acquainted.”

“He may keep all of Meryton at bay, but I assure you, his eyes follow your every move.”

“Truly, Charlotte. I have not caught his fancy. He is destined to marry someone with great wealth and connections. He would never stoop so low as to marry a poor country squire’s daughter.”

“You are the only lady, outside his party, that he has danced with.”

“I know his friend, Mr. Bingley, badgered him into dancing with me that night at the Assembly. I myself heard their conversation about the matter.”

“Protest all you want. I stand by my observations as solidly as Mr. Darcy stands against the wall.”

“He does favor them, does he not?” The two young ladies stifled their discreet giggles behind convenient fans. “Papa said the other day if a great wind ever beset Longbourn, we were to all gather around Mr. Darcy. Because of his height and build, he would hold up at least one wall of the house.”

Their giggles erupted into chortles. Suddenly, Charlotte straightened fully, and from behind her fan, she whispered a word of caution.

“He comes this way.”

Elizabeth blamed the feeling of awareness, which crackled up and down her body, from Charlotte’s warning. It was not as though she could actually feel his presence behind her. That was a phenomenon found only in penny romance novels. Gathering her courage, she turned to face him.

“Miss Lucas. Miss Elizabeth.” He gave them both a polite bow of greeting.

At that exact moment, Lydia and Kitty pushed by them and he stepped closer to Elizabeth to protect her from being jostled. It might have been her imagination, but she was sure she felt the feather-light touch of his hand at the small of her back, although when she looked up at him, his attention – and scowl – was focused on her two youngest sisters.

They ran to Mary, who was playing some soft music in the background while everybody chatted and demanded she play some jigs so they could dance a reel with the young officers who had followed behind.

“Excuse me Charlotte, Mr. Darcy, I must speak with my father.”

She hoped, rather than expected, him to take Kitty and Lydia in hand and tone down their exuberance. They were fair young and needed to be taught how to behave in company. She well knew her mother would do nothing, but what was ignored and set aside at Longbourn would not be appreciated in someone else’s home. She made her way to her father’s side in the card room and experienced the disappointment she’d hoped to avoid.