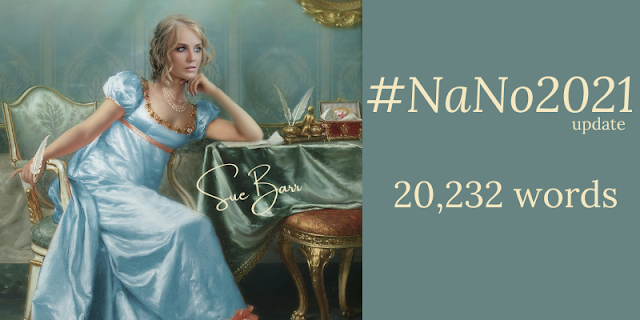 I must admit, I am a little disappointed in my word count. However, I have a valid reason. It is extremely difficult to type with gloves on. Why do I wear gloves inside the house? Good question. I have a somewhat rare skin condition - Dishydrotic Eczema. It affects only the soles of my feet and the palms of my hands, although the skin alongside the edges of my fingers also peels and frays. It is quite annoying, not only affecting my writing, but also normal household things like cooking and cleaning.

Because #NaNo is held in November, which is when the weather changes and the air becomes quite dry where I live, (Canada), all moisture leaches from my skin and I fight to keep everything moist and supple - hence the moisture gloves. I can manage about an hour or two without them on, but after that, I have to make do with reading or some other activity.

I know, I know. Boo Hoo - I have to read my day away. lol  However, I managed to get some words in, tapping out at 20,232 words and will share with you my next excerpt. To extract a partial quote from a review of my last book on Amazon, this work in progress is becoming 'another one of Sue Barr's Darcy is a jerk' stories.

The carriage ride home was silent - mostly. After the first mile, Darcy tuned them out. He had heard enough of Bingley saying over and over how he had never met with pleasanter people or prettier girls.

“They were all so kind and attentive. I was amazed at how they accepted us with no formality or stiffness of manner. I feel as though I can become great friends with all those I met. And, Miss Bennet…. Oh! I cannot conceive an angel more beautiful.”

“On the contrary, Bingley. All I saw was a collection of people in whom there was little beauty and no fashion.”

“And yet you danced with Miss Elizabeth twice.”

“She is tolerable, but not handsome enough to make me lose my head. I find nothing about her person that compels me to declare her the jewel of Hertfordshire, which is how Sir William described her.”

“If that is his opinion, then he must think Mrs. Bennet is a wit!” Caroline and her sister began to laugh. “Sir William’s judgment is unerringly bad. That is not all. I was told Bennet’s estate is entailed away. Upon the father’s death, all the women will be tossed into the hedgerows.”

Darcy ruminated on that tidbit of information. His chances of success with Miss Elizabeth had exponentially increased. The parents would be desperate to have their daughters married, and with such low connections, their pool of eligible suitors had narrowed from slim to almost none. He may not have to waste too much time courting the chit.

“Jane Bennet is a dear, sweet girl,” Mrs. Hurst offered into the darkness of the carriage.

“She smiles too much,” Darcy murmured.

“That may be so, and I think that is what I like best about her,” Bingley said, ending the conversation by turning his attention to look out the window.

Daydreaming of the fair Miss Bennet, no doubt, Darcy thought. He himself turned his thoughts inward and focused on the desire of his heart - Daphne. He had first caught sight of her at a tawdry little opera. Her talent as a singer did not impress him so much as the daring costume she wore on stage. He swore her dress was two sizes too small and her breasts practically spilled out of the top. From his premiere box, he was able to gaze down and appreciate the dusky aureoles of her nipples peeking out whenever she faced his side of the stage.

He had a footman take her his card between acts and introductions were made that evening outside the dressing room of the secondary characters. Within weeks he had her set up in a little house not far from Drury Lane and for the last two years had spent every available night in her bed. If Georgiana had not been so young, he might have dared bring her to his townhouse. As it was, having her in her own separate establishment meant they could be as audacious as they wished and his sexual repertoire grew apace with hers. She proved to be a fearsome lover. A temptress not afraid to show how much she loved him.

There were times he felt bad for having taken her maidenhead outside the bonds of marriage, but she repeatedly assured him she held no regrets. For her loyalty, he rewarded her with a substantial allowance, jewelry, clothing, and her own carriage with matching greys. In all essentials, she was Mrs. Darcy, except by name.

This past summer, after a near catastrophe with his sister at Ramsgate, he was forced to decamp to his country estate in Derbyshire. Unwilling to forgo his lover’s companionship, he had Daphne follow in a separate carriage and settled her in a small cottage near the edge of his property. At first, she had pouted for being removed from London, but when he begged forgiveness and presented her with a ruby and diamond necklace, she apologized for her temper, saying that she resented having to share him with anyone, even if it was his sister.

To placate her, he proceeded to take care of his estate business from her cottage. If his steward and valet were disgusted by his behavior, he cared not. The only person he kept from his mistress was Georgiana. She was far too young to understand his need for this woman who loved him unconditionally.

What would Daphne think of Miss Elizabeth? He had not informed her of his plan to marry even though she knew he had to at some time in his life. There was no getting around the fact he needed an heir. With luck, the future Mrs. Darcy would take with child immediately. At least with her, he need not worry where his seed spilled. He hated using French letters or having to withdraw when everything in him demanded he thrust deep and release. Maybe once his heir was born, he would fill Daphne’s womb with his seed. It would not matter then if she bore him a son. His body tightened in a familiar way, at the thought of losing himself in the warmth of his lover’s body and then watching her voluptuous body ripen with his child.

If only she were here with him right now. He shook his head at his own folly, glad the carriage was dark enough the Bingley family could not witness his self-castigation. He’d only been apart from Daphne for one day and already he ached. Later that night, as he took himself in hand, he wondered if she missed him as much as he missed her. If only he hadn’t promised Bingley to show him the finer points of estate management he’d be in her boudoir, in her bed, and in her body.

Over the next few days, the ladies of Longbourn visited the ladies of Netherfield and their visit was grudgingly returned, for which Darcy was grateful as it allowed him to assess his future family, ensuring to himself they were his best course of action.

He did not have to wait long. The matriarch of the family had no filter on her tongue. If she thought about something, she spoke of it. No topic, it seemed, was off-limits. The two youngest daughters were atrocious, their manners appalling. In truth, they were non-existent. Their conversations revolved solely around the expected encampment of the militia, who they had danced with, and the thrill of flirting. When not chattering like magpies about those topics, they spoke ad nauseum of dresses. Ribbons, dresses, and bonnets. It was quite obvious they did nothing to better themselves with the type of accomplishments a man required of his wife.

His head ached at the continuous volume of noise that spilled out of their mouths.

The middle daughter, when she did choose to add to the conversation, quoted solely from either the Holy Bible or Fordyce’s Sermons for Young Women. The owl-faced chit had no original thought in her head that did not come from a religious tract. It would have been funny if it had not been so pitiable at how she scowled at her two younger sisters, obviously affronted by the way they behaved.

Then, there was Miss Bennet. Calm, serene, and beautiful. That was it. There was nothing of substance in her demeanor. He knew not what she and Bingley spoke of for the half-hour they were in Longbourn’s parlor. She may as well have been an oil painting, sitting next to his friend, her Mona Lisa smiles revealing nothing of what went on inside her head, which he suspected contained nothing but fluffy bunnies, soft clouds, and romance novels.

Of Miss Elizabeth, he noted how she cringed over her family’s behavior and cast furtive glances in the direction of her father, who did nothing but smirk at their antics. It came as no surprise to Darcy when Mr. Bennet abruptly stood and left the room for his library. He expected no less from a man who did not keep his house in order. It also affirmed his decision on how he would achieve his goal.

The concept of courting Miss Elizabeth had unsettled him as he abhorred deceit of any kind and did not want his future wife to think he held her in tender regard. He was marrying her for a purpose and truly did not want to lie about it. Given that the father was lackadaisical in attitude, a compromise of sorts could be easily accomplished with the added bonus that it would infuriate his uncle even further.

Yes, the more he thought about it, the more he liked the idea of a seemingly innocent tryst witnessed by others. Also, it would give him an excuse to hasten to town for a special license, and Daphne would willingly soothe his ruffled feathers while he waited for all the necessary arrangements to be finalized. Satisfied with his well-thought-out plan, he allowed himself to peruse his future bride.

She filled out her dress nicely. Bedding her would not be a chore, that was a certainty and she was a country girl at heart, so residing at Pemberley with their heir would not be a hardship. He settled back on the couch satisfied with how he saw his life going forward. Just then, Bingley stood.

“Miss Bennet and I are going for a walk. Would you care to join us, Darcy? I am sure Miss Elizabeth could be persuaded to keep you company.”

The look of outrage on Miss Bingley’s face almost made him laugh out loud. He agreed with alacrity because it suited his plans. The Misses Bennet excused themselves to gather their outerwear while a footman was dispatched to bring around the gentlemen’s. Caroline Bingley rose to her feet and tugged her brother aside. Although her voice was low, Darcy was close enough to hear what she whispered.

“It is bad enough you are drooling over Miss Bennet, but do you have to drag Fitzwilliam into your ill-bred plans?”

Darcy’s eyebrows raised slightly over Miss Bingley referring to him by his given name. The compromise would have to be staged sooner rather than later. She was becoming far too familiar in her attitude with him and before he knew it, he would find her in his bed. He almost snorted at the thought and could well imagine her surprise if he did. She would discover that he had no intention of ever offering for her no matter what she tried. That lot would fall to some other hapless fool.