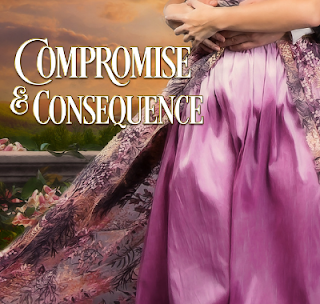 Welcome back after a week of national holidays on both sides of the border here in the Americas. We celebrated Canada Day on July 1 - and it was a gloriously beautiful day. Restrictions were lifted somewhat so our cul-de-sac, which always has a street BBQ, celebrated in style. And... our granddaughter was told she may have her stoma bag removed. Prayers are always welcome. We shall find out soon.

However, holidays are over and that means - back to work, or B.I.C.H.O.K.

Butt. In. Chair. Hands. On. Keyboard.

Today I'm sharing a scene from my next book. I do not have a blurb prepared - yet - but I will set the scene. Elizabeth and Darcy were compromised during the ball at Netherfield and subsequently married. Darcy is convinced she set them up. (silly boy) Because of his anger, and a boatload of pride, he allowed Bingley, et all, to believe he was leaving Meryton without offering marriage to Elizabeth, thereby ruining her. In a conversation between them all, this was discussed - in front of Georgiana, no less. Needless to say, Darcy's sister is very upset with the idea that her brother would not do the honourable thing and took herself off to Matlock House. This scene is Darcy explaining to his uncle that he HAD married Elizabeth.

“Lord and Lady Matlock await you in the green drawing room, Mr. Darcy,” Matlock’s butler informed him as a footman divested him of his outerwear.

In an unconscious effort to steel his nerves for what he suspected, Darcy squared his shoulders and tugged down his vest. Upon entering the drawing room, he was greeted by a bevy of unhappy faces, the most distraught was his sister, who sat close to Aunt Lucinda, the Countess of Matlock and would not even raise her gaze to him. He had disappointed her deeply, he knew. By end of night, he hoped he would begin to salvage the relationship with his most beloved sister.

“Uncle Robert, Aunt Lucinda,” he said by way of greeting. “Georgiana, I am glad you made it safe to our uncle’s house.”

“Before we go into dinner,” Uncle Robert began, “I will have a word with you in my study.”

Darcy gave a curt nod in agreement and followed his uncle down the hall to his study. As soon as the door closed, his uncle turned and said, “What in god’s teeth is going on?”

He stomped to the far side of the room and brought out two cut glass tumblers. “Georgiana arrived here this morning in tears, blubbering about a compromise. Lucinda and I thought she was talking about that reprobate Wickham and began to console her, only to find out she was not aware we knew about Ramsgate, which caused her to cry even harder. Between the hiccups and the wailing, we finally discovered that you – you, Darcy! – have compromised a gentleman’s daughter and refuse to marry her!”

“I am marrying her,” he managed to say once his uncle had calmed down. Uncle Robert handed him a full glass of brandy and sat down heavily behind his desk. Darcy took the chair opposite. “I am surprised Richard did not tell you, I saw him at White’s the day after the compromise.”

“We have not seen Richard for weeks. They captured some high-ranking spies and have had their hands full with interrogations. If you are marrying the chit, then why is Georgiana so upset?”

“I had the Bingley’s over for dinner last night and the topic of the compromise came up.”

“They are aware of the compromise?”

“It happened at a ball Bingley hosted.”

“I take it there were plenty of witnesses?”

Lord Matlock took a sip of his drink. “Explain why Georgiana thinks you will not marry this lady.”

“I cannot say she is a lady,” Darcy muttered bitterly.

“Is she a gentleman’s daughter?”

“What do you mean by that?”

“Her mother has connections to trade and a more uncouth woman I have never met.”

“You mean, other than Catherine?”

Almost against his will, the corner of his mouth tugged upward. “On par with Aunt Catherine.”

“The father is a gentleman? Does he have an estate?”

“His estate is called Longbourn. Of decent size and entailed away from the female line. With five daughters, you can well see how they are desperate.”

“Very few estates are not entailed away. Our family has been fortunate there has always been a male heir and our ancestors did not slap entails on our estates. Surely you do not hold that against this young woman?”

He did, but that was neither here nor there in the grand scheme of things.

“Their circumstance has made the family desperate.”

“I can imagine how trapped you felt, with these Bennets pushing their daughter beneath your nose every chance they got. You are, by far, wealthier than Bingley and already have an impressive estate. No parent worth their salt would let you escape their notice.”

An uneasy realization settled in his chest. During his whole time in Meryton, no mother – or father, for that matter – had ever sought his attention. Not even the ill-mannered Mrs. Bennet. In fact, she had looked upon him with derision, and the father not once attempted to curry his favor. Why had he not seen that before?

“The citizens of Meryton were very aware of my circumstances. Our first night there, we attended the local assembly and I myself heard the titters of ten thousand a year before I barely entered the room.”

“You were introduced to the Bennet’s at this assembly?”

“And they did not push their daughters forward?”

“The mother hinted about dancing in general terms. It was Bingley who badgered me to dance.”

“How singular. A mother of five unwed daughters with an entailed estate, and she did not force them upon you? You say Bingley was the only one who urged you to dance.”

“Yes, he wished me to dance with Elizabeth. I stopped him cold by saying she was not handsome enough to tempt me.”

“I have a sneaking suspicion you made sure the lady involved heard you. What were you thinking? I am no longer surprised no one sought your attention to their daughters.”

“Mrs. Bennet turned her attention to Bingley. She was quite vociferous in her hopes of my friend offering for her eldest daughter. Her joy would have been compounded by the compromise Miss Elizabeth successfully executed on the terrace at Bingley’s ball.”

“A compromise witnessed by many and you still have not answered why Georgiana believes you have not offered marriage to a gentleman’s daughter.”

“I may have allowed the Bingleys to believe I was leaving Hertfordshire without speaking to Miss Elizabeth’s father.”

“Why would you do that? The minute your wife arrives on your arm in town… ah, I see… you intend to squirrel her away at Pemberley.” Darcy shifted uncomfortably in his chair and nodded. “You mentioned the mother thought Bingley would offer for her eldest.”

“I am positive if this incident had not occurred, Bingley would have offered for Miss Bennet.”

“And with you making them believe the family’s reputation was ruined he would not stick around to have the stain spread to his family.”

“And what of Miss Bennet? Were her feelings engaged?”

“I do not believe they were.”

“But you are not one hundred percent guaranteed of that, are you?”

“You said, Miss Elizabeth compromised you.”

“An opportune stumble on the terrace and she fell into my arms. The lace on her gown conveniently caught my button and tore.”

His uncle stared at the ceiling; his drink cradled in the palms of his hands. “Were you not leery something like this might happen when she asked you to join her on the terrace?”

“She did not request my presence, I followed. I thought she would catch a chill,” he explained.

Uncle Robert snapped his attention to him. “You followed her.”

It was a statement, not a question.

His uncle began to laugh. He took a sip of his drink, silently shook his head, and chuckled again. Brow furrowed, Darcy could only watch and wonder what was going on in his uncle’s mind. Finally, the earl stood and held out his hand. Surprised, Darcy put down his drink and accepted the handshake.

“I wish you well in your marriage, Darcy,” he said before exiting the room. “You are going to need it.” 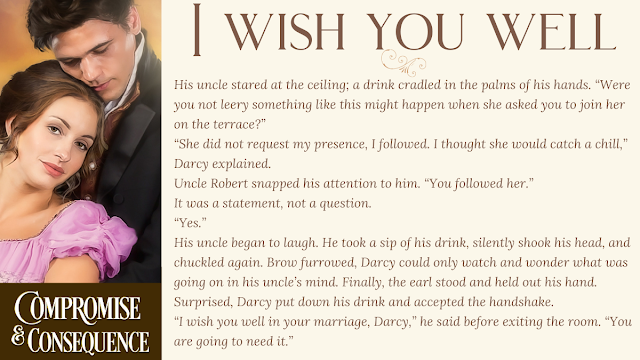