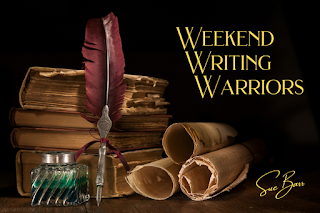 Hello new and old friends. It has been a smidge over one year since I posted an entry to Weekend Writing Warriors, and I'm glad you came for a visit.

Let me catch you up on why I've been absent. First, I was diagnosed with a mass in my abdomen. It was growing very fast and I had surgery in April. Good thing. They removed the mass and two others hidden behind my uterus. The growth, when first discovered, was the size of a grapefruit but the night before my surgery I could actually feel the edges and it was about the size of a small child's football.

Anyway.... I have recovered. I feel fabulous and I released Georgiana at the end of January this year. Yay me! I'm now working on Mary, from which I shared scenes before and you may have to live with a few repeats as I'm starting from the beginning for this exercise until she's done.

Okey dokey. Let's get on it like a bonnet!


At two and twenty, Miss Mary Bennet knew she was considered nearly a spinster. Her youngest sister had married by the age of fifteen – what a story that escapade would make – and her eldest sister had married while on the cusp of two and twenty alongside her other sister who at the time was not even one and twenty and even Kitty had wed at the ripe old age of nineteen. For three long years she’d watched as her sisters fell in love, married and moved away.

She knew she was not traditionally ladylike, as her other siblings. She was too forthright in her speech and she would rather spend an evening playing the pianoforte to an evening in the company of friends, or heaven forfend, attend a ball.

She had a pleasing figure, all her own teeth and if she had a lick of vanity, it was her thick, beautifully curly, mahogany locks of hair. She’d also been told, on more than one occasion by the matronly ladies she sat with at many assemblies and balls, that she had kind eyes.

Poor Mary. Will anyone see her worth, even herself? Thank you so much for stopping by and don't forget to leave a comment, constructive critique, or just a plain old, 'way to go - keep it up'. Until next week...

P.S. Don't forget to hug someone you love today.

Weekend Writing Warriors is a fun type of blog tour for readers. Other writers, like myself, join in my posting excerpts from whatever WIP (Work In Progress) they have on the go, and post eight to ten lines weekly. Rules are simple. Don't exceed the posted line limit - something I struggle with and at times will use creative (an always incorrect) punctuation to create a full scene. If you'd like to see what others have submitted, go to Weekend Writing Warriors.
Email ThisBlogThis!Share to TwitterShare to FacebookShare to Pinterest
Labels: #amwriting, #JAFF, Historical Romance, Jane Austen, Pride & Prejudice, Regency Romance, Romance, Series, Sweet Romance, Weekend Writing Warriors