I am so pleased to welcome Suzan Lauder back to my page. December 3 was the six year anniversary of Alias Thomas Bennet's publication and so it's only fitting that we showcase it on it's 'birth'day. 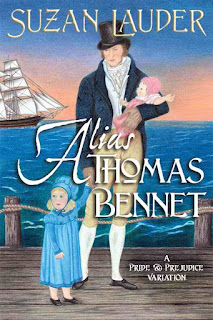 …of most interest to Bennet was Mr. Darcy of Pemberley.

When Fitzwilliam Darcy attends the Meryton assembly, he befriends a quiet, intelligent gentleman. In frequent visits to his friend’s home, he becomes acquainted with the Bennet family of Longbourn. Yet Mr. Darcy is distracted by a strange feeling of having met some of them before.

This is a different Bennet family from the cleverly crafted one in Jane Austen’s Pride & Prejudice. This Mr. Bennet is a responsible gentleman who takes an active role in the education and upbringing of all five of his daughters, manages Longbourn to be prosperous, and displays loving guidance toward Mrs. Bennet—a gentle, caring mother and wife.

There is a mystery lurking at Longbourn—a secret unknown even to Elizabeth Bennet—and Mr. Darcy is entangled in its extraordinary revelations.

Who is Thomas Bennet?

The dust cloud could be seen from some distance, a single disruption in the sweeping view from the garden. As it approached the house, the young man drew it to the attention of his companions. Rising to see where it was headed, the two men realised it was likely an express rider to their home and wondered what could be so urgent.

The family was sitting in the shade in respite from the unbearable heat wave and dry spell that had persisted for weeks. The master made to ready himself for company as he had removed his coat and neck cloth some hours earlier. The younger man touched his father’s arm to halt his preparations and politely offered to greet the courier and collect the missive. The gentleman smiled and granted permission to his son, followed by an admonition from his mother to heed the horse’s hooves lest he be endangered. The young man rolled his eyes. He was taller than his father, but sometimes she still treated him like a child.

He walked slowly to meet the rider. The incessant energy from the sun beating down upon him was almost overwhelming, and he pitied the poor rider his hours in the unrelenting heat. As he waited at the gate, the messenger dismounted and handed over the express post. The young man gave instructions to the groom to care for the horse and directed the courier towards the kitchen for some much-needed refreshment. Then he returned to the shade and passed the missive to his father.

“Pray, what news do we have that is so urgent?” the lady of the house asked of her husband as she saw his grave expression upon reading the letter. His pallor despite the heat told her the news was not good.

“It is from a Mr. Storey in . There has been a dreadful carriage accident, mayhap involving highwaymen. We must go thither at once. It was bad—very bad. Edward was grievously hurt. Rose did not survive.”

“Oh, dear God, what about little Fanny?” his wife gasped through her tears.

“She is well, and with the nurse and Mrs. Storey at the house. Mr. Storey writes that Edward asks for us to send help to post-haste. The note does not indicate the nature of his injuries, only that they are grave. He is under the care of a doctor, and I expect a long recovery period. My dear, you and I must go to attend my cousin and little Fanny.”

“Father, will I be accompanying you and Mama?” asked Thomas Bennet.

“No, son, we may be a long while, and you are to Cambridge in a fortnight. This will not be a pleasant visit. Mary dear, please see to the packing, and I’ll go about readying the carriage.”