I am thrilled to have Melanie Rachel visit my blog today. I devoured her Drawing Mr. Darcy books (two in total) and anticipate this upcoming trilogy will keep me as enthralled. 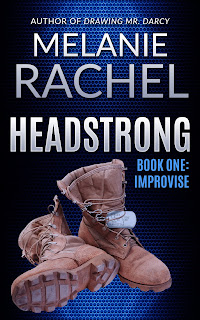 A few months after teaming up with Major Richard Fitzwilliam to thwart a terrorist attack in Europe, USMC Staff Sergeant Elizabeth Bennet is back in the States as a civilian. Her training in cyber-security makes finding work easy, and she’s learning to fit into her new life. But there is lingering fallout both from the attack and her life before it that she's not yet prepared to face. Complicating matters is the major’s handsome cousin.Co-owner of Darcy Acquisitions, CEO of FORGE, and guardian to his younger sister, Will Darcy is stretched to his limits. When Richard sets up an interview at FORGE for his friend Elizabeth Bennet, Will insults her instead of hiring her. In making amends, Will falls for the witty, troubled Marine with long legs and fine eyes.Falling in love is easy, but do these two very different people have what it takes to make love last?

She’d arrived early at De Roos and grabbed a booth tucked behind the wooden front door. She tapped the heel of her boot on the floor, turned to count the large field stones used to build the long bar on the back wall, and tried to guess where each of the customers had come from. Local? Tourist? Embassy?

At last, fifteen minutes past their meeting time and just before she stood to leave, Elizabeth Bennet saw him. Standing a few feet away, hands on his hips, canvassing the room before spotting her behind him, was Major Richard Fitzwilliam.

“Sir,” she replied with a grin.

He raised his hand to attract the attention of a waitress. When a buxom redhead wearing black pants and a tight t-shirt turned and saw him, he held up two fingers and she disappeared behind the bar.

“You made me wait,” she chided, showing the display on her phone. “Hardly the way to say, ‘Thank you for saving my life.’”

Major Fitzwilliam shook his head. “Last meeting ran long.” He tossed his sunglasses down on the table. Elizabeth noted the tailored fit of his brown khakis and dark green polo shirt—casual wear that appeared expensive. Everyone looks so different out of uniform, she thought. He slid into the booth opposite her.

“A regular, I see,” Elizabeth teased. She stretched her toes out in her boots, feeling comfortable at last. She’d spent her shift working on the embassy’s computer network, including carting away some truly ancient desktops and swapping them out for newer models. Then she’d needed to update the software. The assignment was way below her pay grade and boring as dirt. But it was easy enough, and it meant she was stationed in Brussels, so she wasn’t complaining.

Elizabeth had found the major surprisingly good-natured for an officer in the months since she’d arrived in Europe. She’d worried a bit at first that he was flirting with her, but it turned out he teased just about everyone. She knew now that Major Fitzwilliam was too dedicated a Marine ever to break the regulation on fraternization. That being the case, Elizabeth felt safe enjoying his friendly banter. It was a bit like having a charming and sarcastic older brother.

The major ran a hand through his sandy hair in a gesture that indicated a long day. “I am, but I’m not a lush, if that’s what you’re implying,” he said flippantly.

“Well, sir, it would explain how you managed to purge thirty significant documents from your computer . . . don’t you officers know how to back up files?”

“I’m still not sure how that happened.” He exhaled dramatically and tossed his hands up in frustration. “The entire program for the conference next month, including the papers, and the translations, all in the correct formatting. I could have gathered them all again, but it would have taken forever to redo the translations. You didn’t save my life, Staff Sergeant, but you sure saved my weekend.”


About the Author:
Melanie Rachel is a university professor and long time Jane Austen fan. She was born in Southern California, but has lived in Pennsylvania, New Jersey, Washington, and Arizona, where she now resides with her family and their freakishly athletic Jack Russell terrier. Her previous novels include Drawing Mr. Darcy: Sketching His Character (Book One) and Drawing Mr. Darcy: A Faithful Portrait (Book Two) as well as Courage Rises and Courage Requires. She plans to publish Headstrong, a modern P&P adaptation, as a trilogy--all three books will be published in quick succession.


P.S.: As I created the graphic for social media I noticed the small details on the cover that only come from looking at it up close and personal. LOVE. LOVE. LOVE it. Well done, Mel!