This is a romantic comedy novella that’s also known as HOT Collins, and having read the book myself I loved how all the ladies in Meryton went a little boy crazy around the handsome vicar. It's so much fun to read variations of our beloved Pride & Prejudice and A Most Handsome Gentleman definitely takes you on a fun ride. 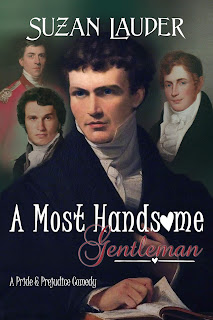 Elizabeth Bennet’s life is uncomplicated until she meets a quartet of new men: the haughty but handsome Mr. Darcy, the pert-with-a-pout Mr. Bingley, the confident and captivating Mr. Wickham—and then there is her father’s cousin, the happy man towards whom almost every female eye has turned.

Mr. Collins is HOT—well, incredibly handsome in Regency-speak—beautiful of face, fine of figure, elegant of air, his perfect clothing and hair matching his Greek god-like form. Unfortunately, when he opens his mouth, Elizabeth wishes he were mute. With affected servility and prideful self-conceit, he capitalizes upon his exquisite appearance and fixes on Jane Bennet as his bride.

Can Elizabeth and Mr. Darcy form an alliance to stop Jane’s suitors from issuing challenges—and will Elizabeth coax a smile from Mr. Darcy?


The carriage jerked into motion while I was not attending, so my head flew back and then forward like a whip. How had we come to leave Netherfield Park without my order? Had Jane given Mr. Hill permission to depart? An agreement to leave would be in contrast to her desire to linger and gape at Mr. Bingley.

A motion caught the corner of my eye. I turned quickly to her side of the carriage and discovered I was correct. Instead of encountering her calm countenance looking forward, the best I could observe was her ear as Jane’s hand rose to wave. Her neck was craned, and a quick glance behind the carriage confirmed that Mr. Bingley stood waving in the drive alongside Mr. Darcy. Mr. Darcy was half a head taller than his friend. Jane did not see me roll my eyes when I settled back in my seat.

The departure was unfortunate for Jane’s romantic inclinations but fortunate for me. After five days at Netherfield Park, spending another day in the presence of those judging Bingley sisters and their compatriot Mr. Darcy would not be beneficial to my equanimity. Without doubt, as soon as I was out of the room, they would spend their time criticizing Jane and me. They scarcely held back their comments in my presence!

“Miss Elizabeth is not interesting as she only reads and walks. Nothing else amuses her.”

“Miss Elizabeth does not mind if her friends change their plans on a whim.”

Recollection of the mortifying incident made me squeeze my eyes shut while it ran through my brain as if it were a vision. My mother and younger sisters know no bounds when it comes to determining ways to mortify me with their gauche manners. Mr. Darcy’s sketch of my character must be complete. His first impression was that I was not tolerable enough to dance with, and he had little reason to think better of me since the assembly where he had made that comment. My family’s embarrassing display did not support the opposite one whit.

Even though he does not much care for me, I discovered his expression would change beneath the effects of my irreverent humour and gentle teasing. I pride myself in the smile count, and Mr. Darcy smiled at my comments four times more than at Miss Bingley’s whilst I was at Netherfield. His natural appearance is superior in comparison with most men, but when his lips curve upward at my teases, changes occur on his face to render his features magnificent: his eyes sparkle and dance, crinkling at the corners, and some rather fine dimples appear next to his bow-shaped mouth. I admit to baiting him to near laughter at times. What would his chuckle sound like?

Having spent her adult life reading little more than business-oriented nonfiction, it was during an extended illness when Suzan Lauder discovered among her books a dog-eared paperback copy of Northanger Abbey. With no idea how she acquired it, but having recalled hearing that Jane Austen was a good writer, she decided to give it a try. She loved it so much that she gobbled up the remaining books.


Dismayed that there were only six completed novels, Suzan read all the remaining Austen she could find: the juvenilia, the unfinished works, the letters, and biographies. During library searches for more, she discovered the world of fan fiction first in novels and then on the Internet. Her curiosity about the possibilities of other stories related to Austen's work led her to start writing her own, exploring new situations and times in which to take the enigmatic Mr. Darcy and endearing Elizabeth Bennet.

Suzan lives on beautiful Vancouver Island, British Columbia, with her husband and two rescue cats, who both enjoy cuddling her while she writes.