I am near completion of Georgiana: Pride & Prejudice continued... Book Three. Only three more chapters and 'Voila!' ~ The End. Such a long journey and you've been there with me. Thank you. Stay posted for release dates and upcoming blog tour. I'm looking forward to you finally getting to read my story of Georgiana Darcy and the handsome Maxwell Kerr, Fifth Duke of Adborough. I haven't released the cover yet. At least, not fully so all you'll receive today is yet another teaser.

She longs for true love...

A dower of thirty thousand pounds places a hefty weight upon the shoulders of Miss Georgiana Darcy. Her tender heart has been broken before by a cad who cared not one whit for who she was, but what she was - a prize to be won and she fears no man will ever see the worth of her heart.

These are the stalwart columns which hold up the life of Maxwell Kerr, Fifth Duke of Adborough. After rescuing Miss Darcy from an inescapable compromise, an offer of marriage is as natural to him as breathing air. When he discovers this is not her first compromise, anger becomes his faithful companion and threatens their tenuous bonds of love and respect. 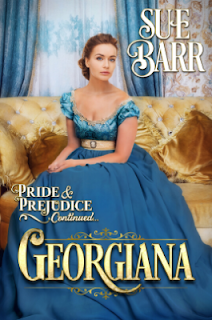 The carriage with its three occupants bumped along the narrow road. At the sound of glass against glass, Georgiana Darcy spared her maid a glance, who clutched a basket of preserves on her lap. The trail, though rough in some places due to the spring storm which trundled through Derbyshire last week, had dried out enough so that Georgiana could visit some long-term tenants before she left for London. The thought of leaving Pemberley and all that was familiar in order to prepare for her first Season caused her stomach to clench. She knew the fear and shyness was irrational, but the thought of meeting so many new people almost made her sick.

“Are you quite all right, Miss Darcy?”

The polite inquiry came from Lord Nathan, better known as Mr. Kerr to the parishioners of Kympton parish. His curly dark hair, broad shoulders and ready smile caused many a young lady to wish he belonged to her but he had no eyes other than for his wife, the former Miss Caroline Bingley.

As attractive as Lord Nathan was, he didn’t make her heart race. No, that pesky organ only galloped along like a new colt around the vicar’s brother, Maxwell Kerr, the fifth Duke of Adborough. Try as she might, no amount of internal scolding changed how she felt around him.

They hit another bump and her maid straightened her straw bonnet.

“Only one more mile, Anna,” Georgiana said with a smile.

She returned her gaze to the passing scenery. The rolling grounds of Pemberley’s estate. In a few short weeks all this would become a memory. If all went as planned, she’d make her debut, meet a suitable gentleman, fall in love and get married.

I have nothing to be afraid of. No one knows about my mistake.

How she longed to capture the carefree girl she’d been before that fateful summer four years ago. Elizabeth, her sister-by-love, cautioned her to move on and forgive herself as she’d been only fifteen at the time, but no one seemed to understand that she’d been more than prepared to become a wife and mother regardless of her age. They all believed her to be a silly girl who’d become caught up in the moment. He’d been a familiar face in a sea of new ones and his ultimate betrayal of her affection cut deep.

She bit back a small sigh and raised her chin, thankful she no longer held a tendré for him. That notion had been ruthlessly squashed when she overheard a conversation between him and her brother immediately following their discovery. He informed Fitzwilliam, in a condescending manner, that he’d pursued her solely for monetary gain as no man wanted such a dull flower for a wife. The utter contempt in his tone had made her cringe and hang her head in shame.

“You seem rather melancholy, Miss Darcy.” Lord Nathan broke into her thoughts. “Are you sure you are up to visiting the Sprague family today?”

“I am well, truly.” She smiled to reassure him. “I have been contemplating Pemberley and how much I shall miss it.”

“Ah.” The quiet assessment in Lord Nathan’s eyes told her he doubted the veracity of her statement but wisely kept his counsel. “I see we have arrived.”

The carriage slowed to a stop in front of a small cottage. Lazy smoke drifted from the chimney and pretty rosebushes lined the walk leading to the front door, which opened as soon as they alighted from the carriage.

Thank you for stopping by. Remember to hug someone you love today.