Man of Her Dreams is the second contemporary novel I self-published after I exited the traditional publishing world and launched my own career. 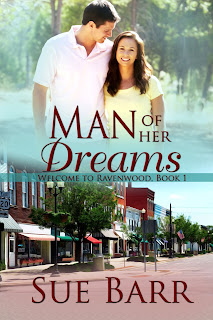 Making it in a mans' world as a home renovation expert is tough, but Lindsay Swanson is up for the job, leaving no time for family and friends, let alone any kind of social life.

Jared Kane moved to Ravenwood for some much needed peace and quiet to finish his next book, which is hard to do when he's hired his sexy neighbor to renovate his kitchen.

Things start to heat up between the two neighbors until Lindsay overhears Jared talking about her notebook. A notebook wherein she and her BFF - after one too many bad dates and one too many glasses of wine - concocted a checklist of the perfect guy.

Is Jared the real deal, or has he been molding himself into the man of her dreams to sneak past her defenses?


Lindsay Swanson turned into the Food Mart parking lot and pulled to a stop near the entrance. Waves of heat shimmered from the hood of the truck, making the near empty parking lot look like a Saharan mirage. Sweat trickled down the side of her temple and she swiped it away before twisting her hair into a Ravenwood Hooligan’s ball cap.

She climbed out of the truck and a fluttering movement caught her eye. With a sigh she peeled a rogue piece of drywall tape off her tee-shirt. When you owned your own renovation business, things got messy.

Through the front window she spotted one of the cashiers working a check-out line and groaned. Just her luck, Carla would be working today. Now everyone in town would know how pathetic her life was. She could hear her now. Poor Lindsay, she only bought a loaf of bread.  No one to cook for...

For a brief moment, she considered hopping back into her truck and driving to her parent’s farm for a home cooked meal. Mom wouldn’t mind an extra body at the table, but Lindsay wasn’t up for the subtle guilt that would be sprinkled throughout the meal.

Over a savory pot roast, Mom would say, ‘A few grandchildren would be nice while we can enjoy them – without assistance from a walker.’ Or, ‘When are you going to find a nice young man?’ Lindsay would always remind her that she had a business to run. Finding a man and having a family wasn’t a top priority right now.