Shelby has seen that Jake is coming into her place of business and decides to hightail it out the rear of the building. As we find out throughout the book, not everything she does goes ACCORDING TO PLAN.


I blew out the rear door and had gone almost three steps when strong hands grabbed and twirled me around. I kicked and wriggled until he put me down. About to have an adult conversation - oh heck, I was going to yell at him - he bent down and rocked his lips over mine. Anything I might have said, or thought melted with the liquid fire spreading through my limbs. I ached to sink into his familiar embrace until my brain finally kicked in gear and I pushed against his chest. I may as well have shoved a brick wall.

"Is that anyway to say hello to your husband?" With one arm around my waist, he dipped his head and attempted to steal another kiss.

I executed a quick side step taught to me by my dad and twisted out of his arms and his lips met nothing but air. I took a small step back and ignored the rapid tattoo of my heart. Tank had a way of making me forget things, like breathing.

Oh no - do you hate him? Well, before you dig in your heels and get all mad... here's the blurb.

Jake Steele, aka Tank, walked away from his wife Shelby and their business without explanation. One year later, Shelby's hired for the biggest case of her career, locate missing socialite, Harrison Grant. To complicate matters further, Tank lands on her doorstep. He's also on the hunt for Harrison, albeit for a completely different reason. Harry is the prime suspect in the grisly murder of a call girl in L.A.

Agent Jake Steele is deep undercover as a P.I., and sometimes there's collateral damage in his line of work. His marriage to Shelby is one of them. With her life in danger, he had to let her think he left for another woman. When this case is over, Tank means to win back the heart and trust of Shelby, the only woman he's ever loved.

But, there's another person who has their eye on Shelby and will stop at nothing to possess her. From an attempted kidnapping to an explosion with deadly consequences, this is not your average missing person's case. 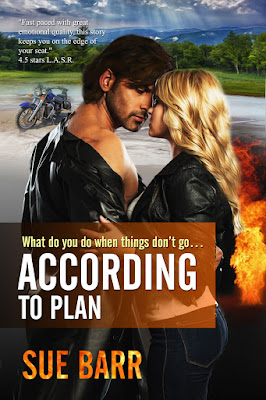