Welcome back my fellow Weekend Warriors! I took a break for a couple of weeks and recharged my batteries. I have a few health issues which preclude me from typing, and I was a bad girl continuing to 'mouse' around, and... well...my body said 'STOP'. Naturally, I did.

So, I read a lot, caught up on all the movies I've seen 30+ times each and baked. Baked and baked and baked. I need to get back to writing to bring my blood sugars down.  LOL  My family thought this was fabulous, but then, I live in a testosterone laden house and they love the fact there were fresh cookies and cakes to be snacked on.

We left off with Evangeline sneaking out of the church to evade her unknown stalker.


Upon exit, she shaded her eyes from the bright sun and crossed the pretty garden, enclosed by a high wall. She wasn't worried about becoming entrapped within the enclosure, the gate to the garden never closed properly and was one of the spots she and a courier met to exchange documents and money. Within seconds she'd pushed through onto the alleyway which ran alongside the east side of the church. 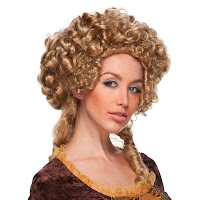 She had only minutes to spare before her shadow realized she no longer remained in the building, so she practically flew across the street and entered a stairwell that led to a small apartment above the book store. Once inside she removed the dark blouse with its fake bosom and tugged off the blonde wig, allowing her long mahogany curls to cascade down her back in messy curls as she hastened toward the window. Although the wig made her head unbearably itchy on hot days such as this, it was a necessary evil to keep her identity secret. Her shadow was on the lookout for a buxom strawberry blonde, he wouldn't think twice about the petite brunette exiting the book store.

Partially concealed by the gauzy curtain, she watched the front of the church, anticipating it would not be long before he appeared and was not disappointed. Minutes after her escape, the man burst through the main doors, and glanced up and down the street in search of her. She almost laughed out loud at having evaded him, but a disquieting thought nagged at her.

So, what is bothering her? Make sure to come back next week and find out, until then please check out other authors participating in this fun writing exercise by clicking HERE.