Whew! I almost missed this week. For some reason I had a life and didn't even give my story a second thought - read that as in NO words written this week. My bad, but I don't feel guilty. I spent time with family and hubby, so it was productive in a different way. Back to the grindstone next week. No excuses.

Last week we left off with Lord George cradling Kitty in his arms as they stood in a ditch. Creative license used with punctuation... 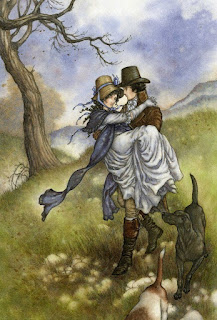 “There is a natural incline over there.” She pointed to the area where the gully gradually met the road. “If you must carry me, this would make it much easier to gain access. I don’t wish to be a burden.”


“Miss Bennet, you are no burden, I swear you are as light as a feather, but I agree, the access is much easier over there.” He began walking toward the berm and within minutes set her on her feet, holding onto her arms for a few seconds longer until he was sure she wouldn’t collapse.


“I’m fine, Lord George, I’ll be on my way.” She attempted a small curtsy and winced.


“What kind of gentleman do you think I am, allowing an injured female to walk home when I have a perfectly fine horse to carry us?”

"No!" She pulled away from him and almost fell again, as this time her ankle refused to hold her weight.

Other authors take part in this weekly writing exercise. To see their posts and for the details/rules about #wewriwa, click on this link here: