THAT WAS WHEN HE KNEW.

HE'D KISS MISS MARY BENNET; THE ONLY QUESTION WAS WHEN.

We left off with:

... if he were honest, he’d never taken notice of her because she always remained in the background, a nondescript little puddle of brown or gray muslin. 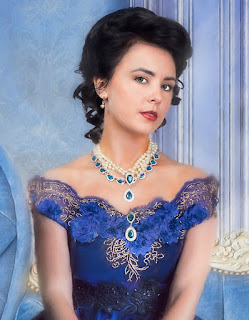 Still unobserved by any of the guests, he took his time to assess the young woman seated at the pianoforte. Her hair was lustrous and dark, similar in color and texture to Elizabeth’s. In fact, she favored her elder sister in many ways, with a heart-shaped face and dark eyes, which at the moment glared at the music sheets as though they’d personally grieved her. Her gown, blue silk, hugged her figure to perfection, and on their own accord, his eyes roamed over what was displayed behind the instrument, skidding to a stop when he reached her… heat licked his cheeks and quickly moved south. No longer decked out in predictable, ill-fitting drab colors, the gown showed her assets to their greatest advantage. Dear God in heaven, Darcy would call him out onto the field of honor if he knew where his traitorous thoughts had wandered. And rightly so.

She struck another discordant note and bit her lip again in frustration. His heart almost thudded to a stop and that was when he knew. He’d kiss Miss Mary Bennet; the only question was when.

His reverie was interrupted by Elizabeth spotting him. He turned with a smile and advanced toward her, noting in his peripheral vision the slight start Miss Bennet gave when she realized he’d been standing nearby, unobserved.

“Cousin Elizabeth, or should I say, The Honorable Mrs. Darcy, how lovely to see you, Madam.” He took her hand and bowed over it. He was pleased to see her flush slightly.

“Stop that, and I am still your cousin. Come along.” She withdrew her hand, tucked it around his arm, and began directing their steps toward the far side of the room and Darcy. “When did you arrive? I did not see you come in.”

“I admit to sneaking in through the servant’s access, and have been here but a few minutes,” he said. Gazing into your sister’s beautiful face, he didn’t say. Nor did he add, admiring her décolletage.

“Fitz is most anxious to speak with you about the upcoming ball. We wish to corral Mama before she lets her new title estrange everyone in Meryton.”