Today, I welcome Sofi Laporte to my Friday with Friends post. 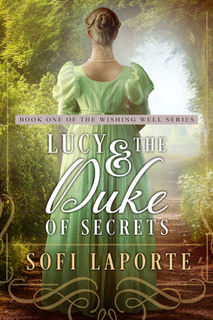 A spirited young lady with a dream. A duke in disguise. A compromising situation.

One in particular: her best friend’s brother, the arrogant Duke of Ashmore. A man she’s never met. Because of him, she’s lost the only home she’s ever known.

She can’t forgive him. Ever.

One in particular: the charming Henry whose eyes shine in a million colours of blue. How lovely would life be if she were a simple gardener’s wife?

…that charming gardener reveals himself to be the Duke of Ashmore?

Will she ever be able to embrace who he is?

Leaving cheerful mayhem in her wake as she overturns the duke’s estate, his house, and his entire life, Lucy is certain of one thing: she loves the gardener, not the duke.

As they match wits, Lucy learns he is not the arrogant duke she thought.

Who exactly is this man, this Duke of Secrets?

Will her love ruin those dearest to her heart?

For the Duke of Secrets is not the only one wearing a disguise.

Lucy and the Duke of Secrets is available HERE

“Excuse me, sir. I need your help. I missed the stagecoach.” Lucy clutched her travel-worn carpetbag as she addressed the burly man behind the bar. He turned to her with a frown.

She held her breath as his sharp, beady eyes appraised her figure, noting her drab brown dress, her threadbare pelisse. She tugged at the bonnet ribbon, setting it askew, so her unruly, bouncing curls spilled over her eyes. She flipped her hair away. Darting a glance at his face, she saw the disapproving set of his jaw. He’d see a girl travelling alone, without a companion. Without any class, style, or money.

“Not my problem.” He turned away to pick up a dirty rag. With his other hand, he picked up a wine glass and proceeded to polish it with a squeak.

“Please. I need to be at Ashmore Hall before nightfall.” Lucy twisted her hands in an agitated manner. She felt the first flutters of panic unfurl in her stomach.

He paused. “Ashmore Hall, eh? The Duke of Ashmore’s residence?”

A look of alertness entered his eyes. “You in service there?”

“I’m new there.” That was definitely true.

The innkeeper’s face softened. “My daughter’s in service, too. Up North. The Duke of Ashmore doesn’t just employ anyone. Tough luck, starting the first day late. You’ll lose your job before you’ve even begun.”

“Can’t you help me?” She had to reach Ashmore Hall before nightfall. She couldn’t afford to stay at the inn. Her breath quickened at the thought of spending the night by the side of the road.

He set the glass down. “You sure you want to go there?”

“Very well.” He jerked his chin toward the window. Outside, a man loaded bushes into a cart. “Try talking to that fellow over there. He’s on his way to Ashmore Hall. Ask him for a ride.”

Lucy could have hugged him. Instead, she quirked a relieved smile at him. “Thank you! I’ll not forget your kindness.”

The man in the outer courtyard was tall and rough looking. He carried a Hawthorne bush over his shoulder, a second under the other arm. The cart was almost full.

“Sir?” Lucy stepped in his path.

“Move aside,” he growled. “This is heavy stuff coming through.” He stepped around her and dropped the plants onto the cart. Then he pulled out a rope and tied it around the end of the wagon to keep them from falling off.

“Yonder innkeeper informed me you could give me a ride. I missed my coach and the next one arrives tomorrow, late in the afternoon. But I can’t wait that long.”

The man gave no appearance of having heard a word she’d said. He climbed into his seat.

She followed him. “Please?”

But Lucy would not be deterred. “It would be so very kind of you if you’d take me along.”

“Up here next to you there is, if you moved aside a bit? I don’t need much space. It’s just me and my bag here.” She patted her carpetbag.

The speckled hat shadowed the man’s face. “Move, girl, you are making my horses nervous.”

“Please, please, please take me along, I really need to reach Ashmore Hall by nightfall. I won’t be a bother.” The pitch of her voice elevated to a panicked squeak.

He lifted his whip, then froze. “Ashmore Hall?”

The man turned and looked at her for the first time, taking in her travel-worn clothes and dusty boots. She held her breath. “Are you employed there?”

“What if I am? I need to be there before night falls. I can’t afford a room here.”

He stared at her with hooded eyes. Then he shrugged and let his whip slash through the air.

The cart rumbled slowly towards the gate. She threw her bag down in frustration. It landed in a puddle. “Oh, blast it all. Why can’t Arabella live in a more accessible place? Now what am I going to do?”

The carriage came to a halt. The man stared ahead, immobile. Then he called out, “What are you waiting for, girl? I haven’t got all day.”

It took Lucy a moment to comprehend what he meant. Relief swept through her. She picked up her muddied bag and scrambled into the driver’s seat next to him.

“Thank you, oh, thank you, thank you,” she said, breathlessly. Then she clung to his arm as the carriage set in motion again and she nearly tumbled out again.

“I’ve a feeling I’ll regret this,” he muttered as he untangled himself from her. 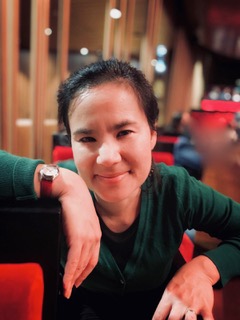 Sofi was born in Vienna, grew up in Seoul, studied Comparative Literature in Maryland, U.S.A., and lived in Quito with her Ecuadorian husband. She’s worked as a journalist, university lecturer, foreign language teacher and librarian. Sofi likes coffee, owls, ruins and books. When not writing – she is always reading – she likes to travel and scramble about the countryside exploring medieval castle ruins. She currently lives with her husband, three trilingual children, a sassy cat and a cheeky dog in Europe.

Sofi started out as a YA fantasy romance author, with stories published in the following Dragon Soul Press anthologies: Lost Love, First Love, Sea of Secrets, Coffins, and Dragons, as well as a selection of poetry in Organic Ink I. Two of her children’s stories are published in Magic for Beginners: Magical stories for Kids, and anthology by Fantasia Divinity Press.

Thank you, Sofi, for joining me today. Your story sounds wonderful and is already picking up lovely reviews on Amazon.