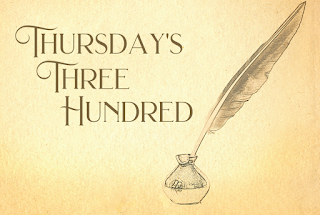 Welcome to my newest Thursday's Three Hundred. We are at the beginning of Mary: Pride & Prejudice continued... Book Four. So, let's get on it like a bonnet, shall we?

“That is very strange. But I suppose you had no opportunity. Your mother should have taken you to town every spring for the benefit of the masters.”

“My mother would have had no objection, but my father hates London.”

“Elizabeth, have you never wondered why your father hates town so much?” Fitzwilliam Darcy asked his wife while she buttered a light as air croissant.

“No, he does not explain his reasons to anyone, for anything. He hasn’t been to London since after Lydia was born, that I know of.”

“Tell me, what do you think of this article in the paper today?” He laid the latest issue of The Gazette beside her plate, turned to page three.

“Which article?” She picked up the paper and quickly read the headline which heralded a royal celebration slated for the middle of May. Beneath the introduction were five columns filled with names and counties.

“The Palace is desirous of a celebration and, as such, invites all those granted a title since the turn of the century to attend.”

“What does that have to do with Papa’s hatred of London?” Elizabeth queried, a slight frown furrowing her brow.

“Read the list, my love. It’s in alphabetical order.”

Lizzy perused the document a second time. Her eyes widened, her mouth opened, and she began to laugh. She laughed until tears formed and flowed down her cheeks. Fitz couldn’t help himself; he laughed with her. When their hilarity subsided and she’d ceased to hiccup, she set the paper aside and said, “You mean to tell me Mama has been Lady Bennet these past fifteen years and Papa never told her?”

“Oh my, what I would give to be a fly on the wall of Papa’s study when Mama finds out Papa is a Baron.”