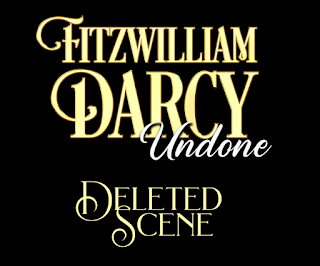 I have two scenes from the first chapter. The first was about Mr. Darcy replacing 'himself' in Elizabeth's dream dancing the scandalous waltz with her before he became quite daring in kissing her. He not only claimed her lips but his hands molded themselves to… ummm… certain parts of her body.  All part and parcel of him becoming 'undone'.

The second scene I shared was of Lizzy waking up and discovering the marks (love-bites) on her collarbone. She believed that, in her dream state, she pinched her skin to give herself the look of a love mark. Lizzy, Lizzy, Lizzy. Little do you know…

I'd originally written this scene just a tad different, in fact, it was deliciously naughty as you will find out for yourself.

With her hair pinned up in a simple bun, wearing the lovely dress she had on earlier in the evening, Darcy knew immediately she was reliving that night’s assembly. He saw himself, standing stiff along the edges of the ballroom, watching her with hooded eyes. So, that was how she saw him, dark and brooding. Dream Darcy approached and asked for a dance. Something he regretted not doing in real life.

“I thought I was not tolerable enough for you Mr. Darcy.”

Another thing he regretted, most heartily. It was time to adjust her view of him.

With a whispered word and hand gesture, he replaced ‘dream’ Darcy with himself and replied, “I was a fool, Miss Elizabeth. You are the handsomest woman of my acquaintance.”

He took her hand and drew her to the dance floor, willing the orchestra to play the scandalous waltz. Her figure was light and pleasing, her scent a now familiar mixture of lavender and honeysuckle. The crowded room disappeared, replaced by one he was intimately acquainted. The master's chamber at Pemberley.

A canopied four poster bed dominated the room lit only by the fireplace. He plucked at the pins in her hair, almost sighing out loud when her mahogany locks cascaded down her back in a fountain of curls and then swung her up into his arms. The mattress dipped when he placed one knee on the edge of the bed and laid her atop the deep burgundy counterpane, those glorious curls now spread across his pillow. Satin ribbons unfurled and drifted down from the massive posts of the canopy, wound around her wrists. Her fingers curled around the ribbons as her arms were pulled over her head toward the headboard. With a wave of his hand, her clothing melted away, leaving her creamy skin exposed to his hungry eyes. Arms stretched up, her breasts were forced high and tight. His own clothing fell away and his need to taste her skin consumed him. As he stretched his full length over hers, he knew, with one thought, Elizabeth could leave the dream. The fact that she stayed within the bonds of his desire, spoke loudly of her own.

"You are so beautiful," he whispered against her ear, nuzzling the tiny pink shell, trailing his hand from her collarbone to the plump fullness of those upturned breasts.  His lips and teeth followed the path blazed by his hand and lavished attention on the tightened peaks before drawing the tender underside of her breast into his mouth. He couldn't get enough of her. Small gasps erupted from Elizabeth when his errant hand passed over her most private place and slid into her body. Her back arched, pushing her breast further into his mouth. He wrapped an arm around her waist and drew her close, his need to possess her completely driving all sane thought from his mind.

Even though his desire made him want to fully seat himself within the cradle of her body, he took his time nipping and kissing every inch of her skin as he moved lower. When he reached her most treasured spot, his tongue coaxed the tiny pearl from its hiding place. Elizabeth quivered and writhed, incoherent words escaping her lush mouth. He pressed one, then two fingers into her slick heat, all the while teasing the bud with his teeth and tongue. When he was assured she was ready, he feathered kisses up her belly, across her breasts before claiming her full mouth, letting her taste her desires on his tongue. He positioned himself at her sweet entrance and thrust. When she gasped, he plunged his tongue into her mouth, mirroring the act of their heated exchange below.

Minutes, hours, days passed before he was fully sated, Elizabeth curled against his side, her head cradled on his chest. He knew not how many times he'd taken her but knew a lifetime would never ease the ache he felt for her. She stirred in her sleep and murmured, "Jane?" He kissed the top of her head through her now tangled curls and released the dream back to her. She'd never remember this night, but he would and it was a memory he'd treasure forever.

Do you believe me when I tell you that Elizabeth saw more than a 'mark' on her collarbone after this scene?