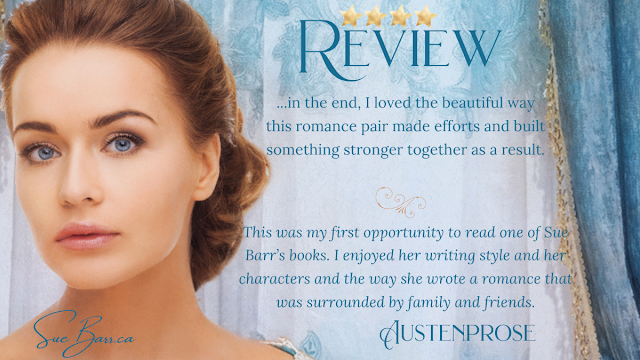 From the desk of Sophia Rose:

I have been aware of Sue Barr’s work since she released the first book in her Pride and Prejudice Continued series, Caroline. My curiosity was aroused when she chose to continue Austen’s classic story with the memorable side character and didn’t hesitate to redeem Caroline Bingley and give her a chance at happiness in an unlikely place. Then it was Kitty Bennet’s turn in book two, Catherine, who fell hard for a man who was not what he seemed. And, here we have the third book, Georgiana, with Mr. Darcy’s little sister stepping out of the shadows of her past and becoming the current heroine.

Georgiana is recovered physically and emotionally from her youthful mistake with George Wickham, but now that she is on the cusp of her presentation and entrance into London society, she wonders if she is truly ready or if she will be fooled again. If only Max Kerr, Duke of Adborough, the kind gentleman who put her at ease and made her feel they belonged, felt the same way about her as she did for him. Their families are friendly, and she knows they could be happy. Instead, she hears nothing from Max and now must face a London season of discovering the difference between those who would pursue her for her fortune. She has her family around her, but the danger still circles and, in the end, after a painful, winding road, can she let trust grow and forgiveness heal so she can find love with the right man.

Georgiana was a story that I read out of order and from which I still found great enjoyment. I had no trouble doing so because the early chapters caught the reader up on the two previous books and the news of the family. However, it is something of a series spoiler because it shares what happened with the earlier couples to a certain extent. So, if a reader likes to get all the surprises and story as it happens, then it is best to start at the beginning with Caroline.

As to the story, the first half was gently paced, sweet, and rather predictable. Georgie was an adorable heroine and easy to like and wish well. She wants to be done with her past and have the love and friendship she sees in her brother’s marriage and those of her friends. She knows she can have that with Max but is not certain he sees her the same way. Max’s perspective alternates with Georgiana’s so the reader does know what Max is thinking and it’s all going on swimmingly toward a rapid conclusion even if there are sharks in the water after Georgie’s fortune and match-making mamas intent on Max as a future son in law.

But, then, I was left goggling at my reading device. I knew there had to be something that gummed up the works since they were well on their way to Happily Ever After at the half-way point. But, holy misunderstandings, Batman! I thought for sure I was reading one of those dream-land alternate reality things that happen when people fall asleep and I was so confused by the radical turn of events. That makes two of us because poor Georgie was equally in the dark and it is only after some time has passed that Max’s actions – well, I wouldn’t say they make sense, per se because I really felt the man went off the rails—but I got an explanation. And, this forces a more emotional, harder-earned romance situation for the second half.

While, I can appreciate—and I do—that the book was not some fluffy no-conflict story that was pretty much over halfway through and would have just dragged on too syrupy sweet to be endured, I also felt quite jarred by everyone rushing into high alt starting with Max and ending with Georgie’s relations. It felt out of character for several and took me out of the story a bit.

But, in the end, I loved the beautiful way this romance pair made efforts and built something stronger together as a result.

This was my first opportunity to read one of Sue Barr’s books. I enjoyed her writing style and her characters and the way she wrote a romance that was surrounded by family and friends. I want to read the earlier books and would eagerly pick up future releases. I would recommend this book/series to those who enjoy sweet, heartwarming Austenesque sequels or stories about the secondary characters.