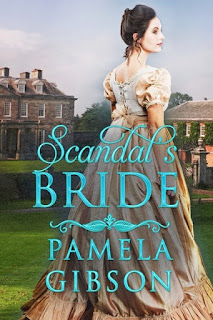 Author of eight books on California history and twelve romance novels, Pamela Gibson is a former City Manager who lives in the Nevada desert. Having spent the last three years messing about in boats, a hobby that included a five-thousand-mile trip in a 32-foot Nordic Tug, she now spends most of her time indoors happily reading, writing, cooking and keeping up with the antics of her gran-cats, gran-dog, and gran-fish. Sadly, the gran-lizard went to his final reward. If you want to learn more about her activities visit her website, linked above, and sign up for her blog and quarterly newsletter.

Lady Gwendolyn Pettigrew longs to be a mother, but refuses to marry the lecherous old fool her father has found for her. When her best friend convinces her to consider her husband’s younger brother as a suitable candidate, Gwen agrees to a marriage of convenience, hoping against hope that her dream of becoming a mother will have a chance.

The Hon. John Montague, a penniless younger son, is handsome, witty, and thrilled that a woman with a dowry has agreed to wed him. Best of all she’s a fiercely independent bluestocking, a woman who won’t want to bother with a family. Because John has a shocking secret. He’s vowed never to bring a child into the world, a child who, like his own mother, might carry the strain of madness.

As secrets unfold, tension grows, threatening the fragile bonds they’ve forged.  Worse, someone wants them to abandon their home and leave Yorkshire, and they’ll stop at nothing to make it happen.

The walls of the dower house rose before him, higher now, obscuring the stone house beyond. The sturdy wooden gate had a double lock to make sure the woman inside could not escape.

The house itself was small, but pleasant. He’d made sure all her personal possessions moved with her, so she’d be surrounded by familiar things. Her favorite chair, her ornate silk bed hangings, the hand-carved armoire from France—all these fripperies occupied the rooms in her new home. Tall windows overlooked a flower garden planted with roses, wisteria, and rhododendrons. In time, ivy would cover the new section of the wall.

John Montague inserted the key and opened the gate.

He swallowed the bile rising in his throat. He’d forced himself to visit her, not knowing if he’d be greeted with affection or a screaming rage. But he’d been assured today was one of her good days.

Her longtime maid answered the door and seated him in the small parlor. He crossed his legs and swung his foot, his gaze fastened on the door into the hallway. It opened.

Oh dear. Love never runs a smooth path. I've not read Pamela's book but now that I've had a sneak peek at the first page I'm scooching over to Amazon and adding yet another book to my TBR. One day it will virtually topple over and kill my kindle... lol