My guest today is Karen M Cox and she's brought with her today a unique variation of our favourite Pride & Prejudice couple, Elizabeth and Darcy. This adventure is set in a more modern time - towards the end of the official cold war era before the Eastern Wall was torn down. Emotions ran high. Spies lurked in dark corners and sometime on your very own street. Loads of intrigue and I'm sure Ms. Cox has captured it all in her delightful mystery, UNDECEIVED. 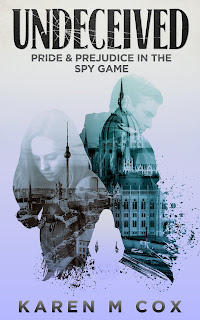 “...if I endeavor to undeceive people as to the rest of his conduct, who will believe me?”

Darcy’s charmed existence seems at an end as he fights for his career and struggles against his love for the young woman he doesn’t know is watching his every move.

Elizabeth’s confidence dissolves as nothing is like she planned—and the more she discovers about Darcy, the more she finds herself in an ever-tightening web of danger.

His vision began to darken. He heard shouts again, a man’s, no… there was a female voice in the mix, but he lacked the brainpower to muster a care for who it was. Was it English he heard? Or was his mind, so inured to translating, automatically interpreting the German? He was tired, so tired, but if he could only rest a while, he could recruit some strength and get…where? Ah yes, West Berlin.

The voices grew even as his consciousness faded. His mouth tried to form words like “over here” or “help me.” But nothing came out except more blood—from his side, from his shoulder, from his hand. There were pinpricks behind his eyelids again, moving faster like a giant kaleidoscope, and the world continued to melt away. He felt movement when he slumped out of the pantry door and cursed when someone pushed him back up to a sitting position.

“Come on. Wake up, old chap! We’re getting you out of here. Stay with me. My car is right outside.”

“USBER. Hurry.” His speech slurred as if he’d been on a three-day drunk.

“Yes, straight across the border.”

William Darcy forced his eyes open, but it wasn’t Fitz he saw in front of him.

“You arrogant bastard,” she said in a clipped tone. “What don’t you understand about ‘stay put’? We’ve been looking for you for flipping ever! You’re damn lucky Fitz remembered the location of this safe house.”

“Hi, little cutie. What are you doing here?” His head lolled about on his shoulders.

“Aww, honey, don’t nag. Hey, how you gonna get us out of this one? How good is your German?” He grinned, inwardly laughing at the asinine situation in which he’d found himself.

“You know it’s damn good, danke. And I’m going to get us out of here ’cause, unlike you, I’ve got my ducks in a row,” she quipped then gasped as she drew back her hand, covered in his blood. “Holy shit!” She stared at her blood-soaked fingers. Apparently, he’d bled through his last attempt at a bandage. She heaved him toward her and ran her hands over his torso, assessing the damage as he groaned again.

“Fitz”—she spoke with a forced calm—“find something to check this. We’ve got to get him out of here. And there had better be a medical team waiting as soon as we get across the border.”

Fitz disappeared and returned with a couple of musty towels, one of which she slipped under Darcy’s armpit and tied firmly.

“I have to stop the bleeding.”

“If you put a tourniquet on there, I’m liable to lose my damn arm!”

“Stop being such a baby. It’s not that tight.”

“Is…too.” He was losing the burst of alertness fostered by the hope of rescue and the pain in his shoulder.

She tried to pull his shirt up to see, but it was stuck to the side wound. Looking at it, she sat back, horrified.

“Liar,” he murmured. Over her shoulder, she spoke in a low voice. “We have to go—now.”