Why do women fall in love with Fitzwilliam Darcy of Pemberley? He was proud, arrogant, dismissive of the common folk of Meryton and practically wrinkled his nose in the presence of Mrs. Bennet and her multitude of daughters.

Let's break down his character as Miss Austen presented it. For starters, he's handsome. 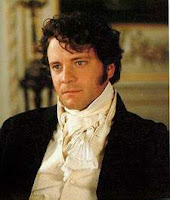 Mr. Bingley was good looking and gentlemanlike; he had a pleasant countenance, and easy, unaffected manners. His sisters were fine women, with an air of decided fashion. His brother-in-law, Mr. Hurst, merely looked the gentleman; but his friend Mr. Darcy soon drew the attention of the room by his fine, tall person, handsome features, noble mien;

Next came the circulated reports of his wealth.


and the report within five minutes after his entrance, of his having ten thousand a year. The gentleman pronounced him to be a fine figure of a man, the ladies declared he was much handsomer than Mr. Bingley, and he was looked at with great admiration for about half the evening,

Oh dear, only half the evening. This doesn't bode well for our intrepid hero.


till his manners gave a disgust which turned the tide of his popularity; for he was discovered to be proud, to be above his company, and above being pleased; and not all his large estate in Derbyshire could then save him from having a most forbidding, disagreeable countenance, and being unworthy to be compared with his friend.

He then capped of this stunning first impression to the assembled crowd by insulting one of the Bennet sisters, considered to be a jewel of the county.


'You are dancing with the only handsome girl in the room,' said Mr. Darcy, looking at the eldest Miss Bennet.

'Oh! she is the most beautiful creature I ever beheld! But there is one of her sisters sitting down just behind you, who is very pretty, and I dare say, very agreeable. Do let me ask my partner to introduce you.'

'Which do you mean?' and turning around, he looked for a moment at Elizabeth, till catching her eye, he withdrew his own and coldly said, 'She is tolerable, but not handsome enough to tempt me; and I am in no humor at present to give consequence to young ladies who are slighted by other men...'

Wow, he put a cracker in that one, didn't he? So, I ask again. How in the world did such a man earn the readers undying devotion? Stay tuned, we'll look at what has us swooning whenever we hear the name.... Mr. Darcy