The past few weeks I've been posting from the first time Miss Catherine Bennet meets Lord George, and that's kind of unfair as it's not where the book begins - that's Chapter Two. Previously, I've posted the delightful romp of Lord George and Evangeline being assaulted at her place of 'employment' and before killing the two unknown ruffians, George was convinced the one man recognized him. And... on we go.

"I'm afraid your cover has been compromised." Lord Patrick Grayson, Marquis of Chadwick clasped his hands on his desk and peered at George over the rim of his reading glasses. "You're quite useless to us now."

George sat in the chair placed directly in front of Lord Grayson's desk. One elbow rested on the arm of the chair and he rhythmically rubbed his lower lip with his index finger. A childhood habit indicating deep thought.

He and Evangeline had searched both men thoroughly, finding no form of identification or written instructions on either of them. The larger man definitely had been a thug for hire, but the cultured tones and soft hands of 'Reggie' hinted at a decent education and no real hard labor. Had he been the leader or following someone else's orders? The same sense of familiarity washed over George.

"I'd like to know as well." Lord Grayson removed his glasses and pinched the bridge of his nose. "At times, I think there are more people working for Boney in England than in France. Money and a skewered devotion to ancient family ties can turn even the most patriotic away from their King. Look at what happened in our very own country. The Prime Minister assassinated."

"Nasty business, that. I'm still not convinced there wasn't a conspiracy." George rose to his feet and paced to the large Palladian window, clasping his hands behind his back. "So what am I to do? Become another useless younger brother to a Peer of the realm?"

"You do yourself a disservice, Lord George. You family has a proud history. The ton does not know you work for the Crown. For all they care you are their golden boy who sowed more than his share of wild oats. Continue on with your life. Find a pretty girl and get married. It would make the Duke a happy man if you settled down."

"Maxwell would be ecstatic if I entered into marital bliss." George turned to face Lord Grayson. "Unfortunately, I have played the part of a Rake so convincingly I'm sure all the good mothers will hide their daughters as soon as I enter the ballroom."

"As the brother of a Duke, you and I both know your reputation will not stop them from wanting an association with your family."

"All they see are my connections and fortune. I'd like to meet someone fresh and new. Someone who isn't skilled with the arts and allurements used to ensnare a husband."

"Then, look at this as a blessing. Now that you no longer have to look over your shoulder and peer into every dark corner for the enemy, you can enjoy the full social whirl. With your charm and exceedingly handsome visage, you will have no difficulty meeting a nice young lady."

George doubted that very much, but didn't have the heart to contradict his friend and mentor. All this talk of meeting young girls was beginning to give him a headache. He'd take a rough and tumble spy any day over a cunning mother on the hunt for a son-in-law.


Of Note: Today is my wedding anniversary.
Happy Anniversary, Rob. I love you more than cheesecake. 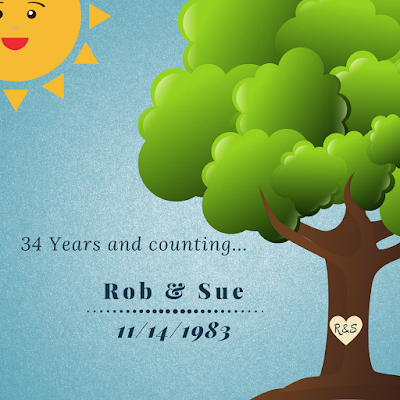