We left off last week with Kitty musing how she and Mary were often the 'forgotten' ones in relation to their other sisters. Jane, the beautiful one;  Lizzie, the witty one; and Lydia, their mother's favourite. Kitty is confined to bed from her injuries after nearly being run over by Lord George Kerr and his horse, Buttons and Mary has brought up tea and scones. 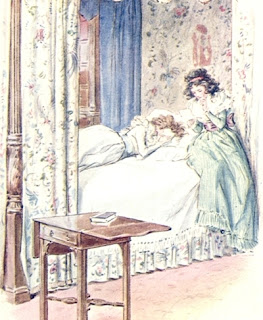 She'd been the silly sister who followed after Lydia, while Mary was the pious sister who put a damper on most of their activities. Well, not her activities, per say, but mostly Lydia's, which Kitty had happily engaged in until... until George Wickham entered their lives.

Once Lydia met him she became even more untameable. None of the family knew how many times she snuck out to meet him. Kitty begged her to behave in a more circumspect manner, but Lydia then only teased her that she was becoming more like Mary. Angry and hurt that her closest sister was abandoning her, she'd retorted she'd never become like Mary.

Cruel words and not for the first time she'd had to ask forgiveness for such an unchristian attitude toward her sister - a sister who didn't deserve those cruel and unkind words.

"I'm so glad we have this moment of peace together." Impulsively, she reached out and grabbed Mary's hand. "At times I feel we are strangers living under the same roof."

There you go. Kitty is healing the breach.
To check out other authors who participate in Weekend Writing Warriors, and for the rules of how to partake, if you decide you'd like to join, click HERE.